Hi everyone!  We are currently in the middle of the Thar Desert on a camel trek!  Since I’ve fallen a bit behind with the posts, I scheduled one for while we are MIA in hopes of catching up!

So after Varanasi, we headed to Agra on an overnight 2nd class AC sleeper train.  We were supposed to arrive at 6am, but of course the train was about 4 hours late.  We enjoyed the extra sleep, but at the same time wanted to get to Agra.  We had heard the city of Agra itself isn’t anything too exciting and decided to stay for only 1 night.  We had a train booked for the next morning, so the sooner we arrived to Agra, the more time we had to explore the Agra Fort and the famous Taj Mahal.  We arrived, checked in and went to eat a quick lunch before sightseeing. 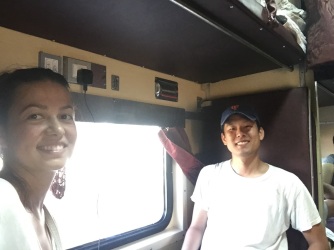 We started with the Agra Fort which is our first of many forts to come while in India.  We wanted to purchase the audio guide, but they supposedly were all handed out (we did not see anyone with them as we walked thru, so either that was a lie or they only have like 4).  We waited a little bit for someone to return with an audio guide and after some time we decided to go ahead without it.  It was very impressive though it would have been nice to learn a little bit about the history.  We wandered around for a couple of hours before heading to the Taj Mahal.

A little history on the fort:  Agra Fort (also known as the Red Fort in Agra) is the former residence of the Mughal Dynasty (which ruled between the mid-1500s to mid-1800s).  It is also a UNESCO World Heritage site.  Construction of the fort took 8 years and was completed in 1573. 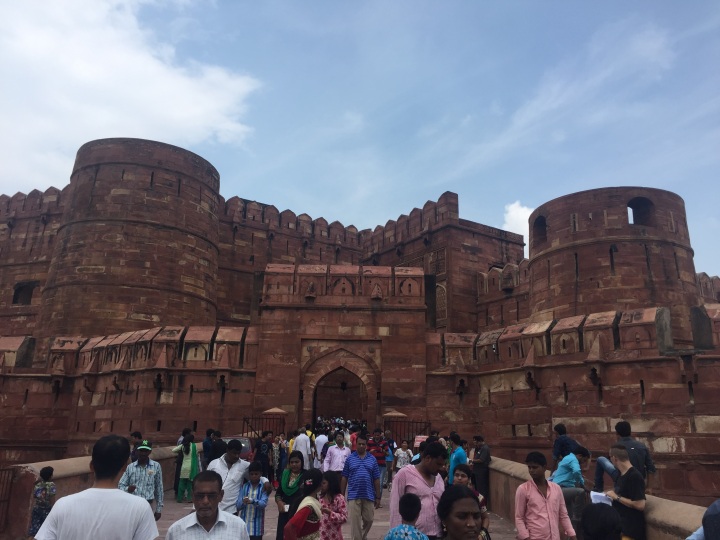 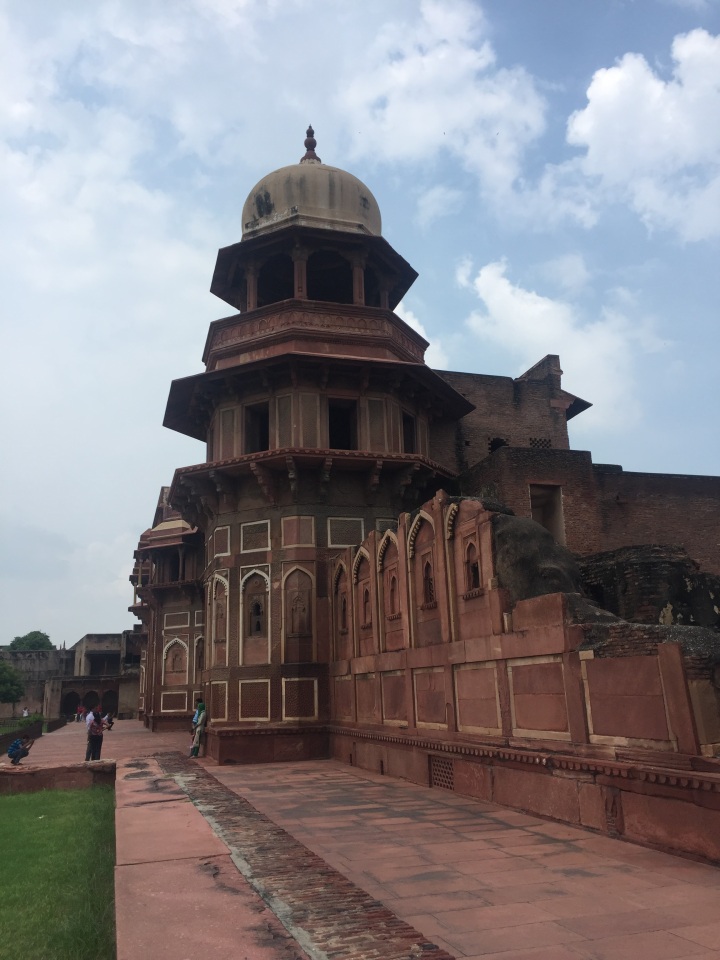 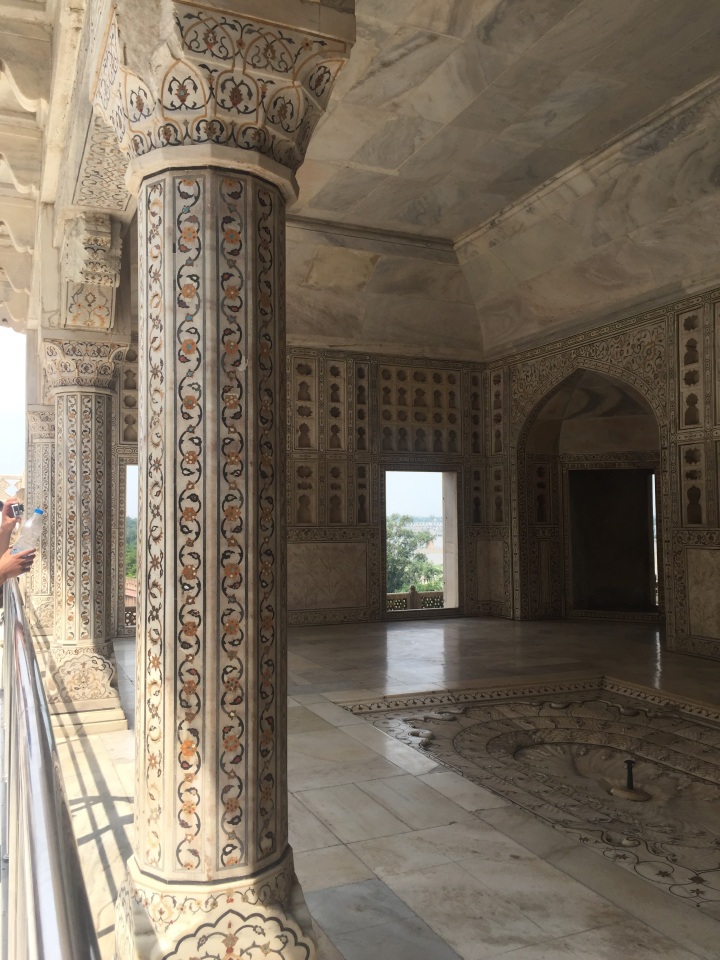 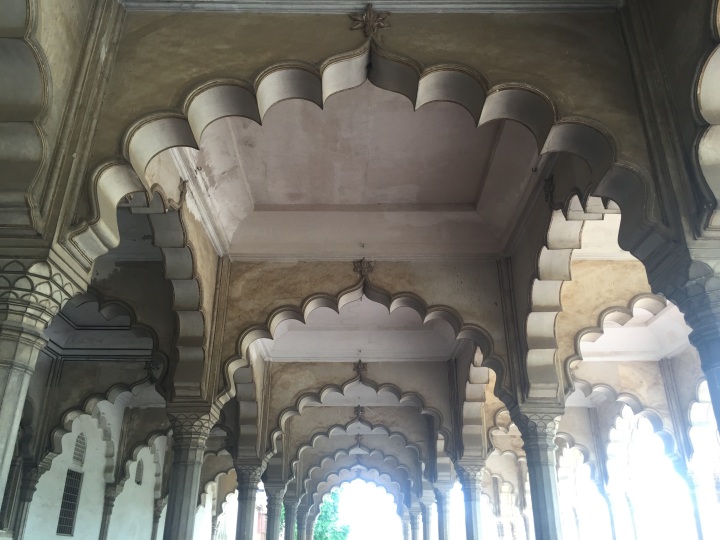 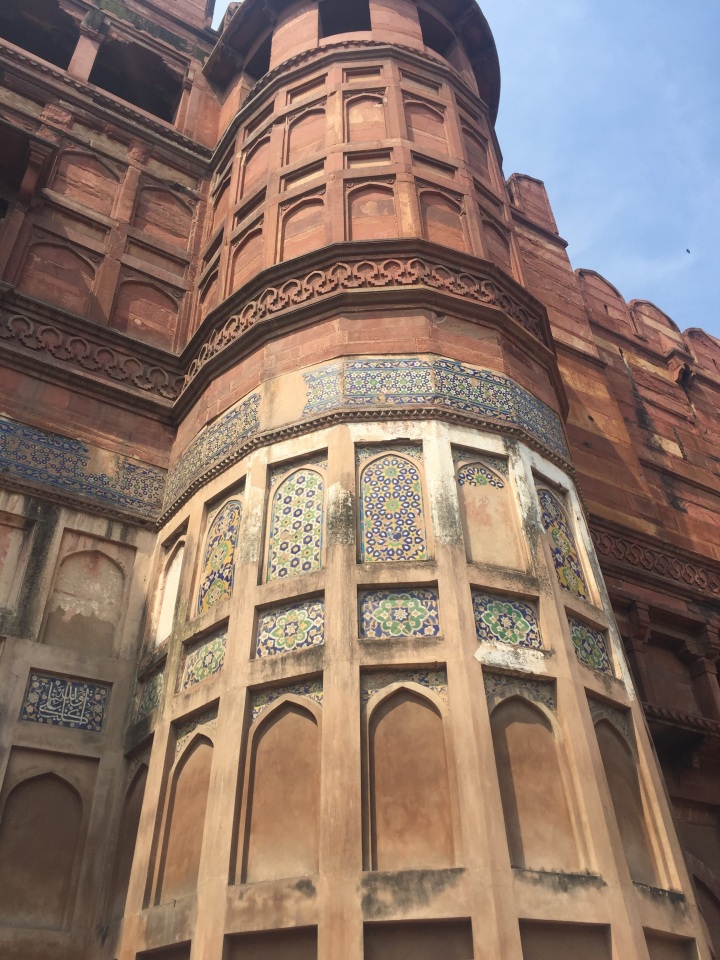 Hoch – Do you see the colorful flower motifs on some of the arches? They are not painted, but rather inlaid stonework. It means they cut out of the marble the exact size and area where the pattern would go, and they fill it with the colored stones. They are of incredible craftsmanship.

To be safe, we went ahead and downloaded the Taj Mahal audio guide app on our phones just in case the audio there was also MIA.  I am glad we went to the fort first because I don’t think anything can follow the Taj Mahal.  We walked through the garden and surrounding buildings listening to a little bit of the history before finally walking up to the main event.  It was absolutely beautiful!  Every detail has some reason as to why it was used.  Like seriously, just looking up at the mausoleum from the outside was the best part.  We walked inside it and since it was later in the day it was a little dark, but you could still see a lot of the intricate details involved (no pics allowed inside though).  We spent a couple of hours taking it all in (and weaving through all the Indian tourists there) before heading back to the hostel.

Note: The Foreigner Tourist Entrance fee is 1000 rupees compared to Indian Tourist Entrance Fee of only 40 rupees.  How crazy is that!?  Some perks of the foreigner fee include a bottle of water, shoe covers (must remove shoes or wear shoe covers to enter the inside of the Taj Mahal), and you can cut any line.  We did not realize this at first and were waiting in the long line with all the Indian Tourists (several of which try to cut the line, but we had none of that) before one of the workers informed us that we could go to the front of the line. H – I had to literally grab and pull out some people who were constantly trying to cut the line. At least they don’t put up a fight. Except for a pair or ladies who were arguing with a police officer who actually saw them cut the line. After an intense yelling match the ladies got to stay. You never mess with country women.

Some Taj History:  The Taj Mahal (also a UNESCO World Heritage Site) is an ivory-white marble mausoleum that was commissioned in 1632 by Mughal emperor, Shah Jahan, to house the tomb of his favorite wife, Mumtaz Mahal.  The tomb is the centerpiece of the complex that also includes a mosque, a guesthouse, and is set in formal gardens.  Construction took 20 years and was so costly that it ended up leading to the empire’s decline. 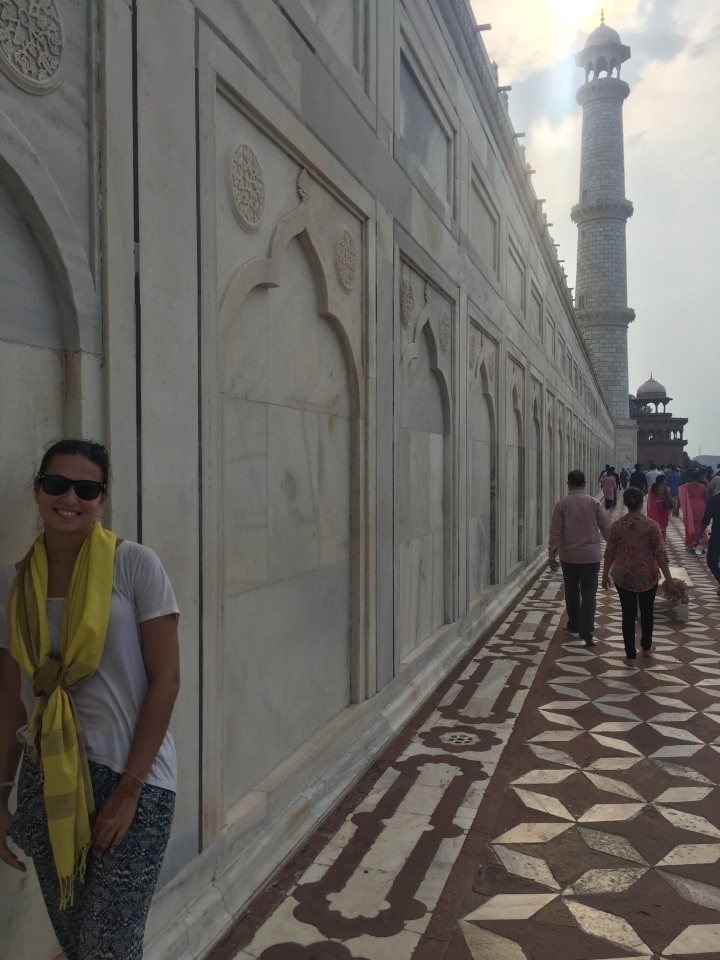 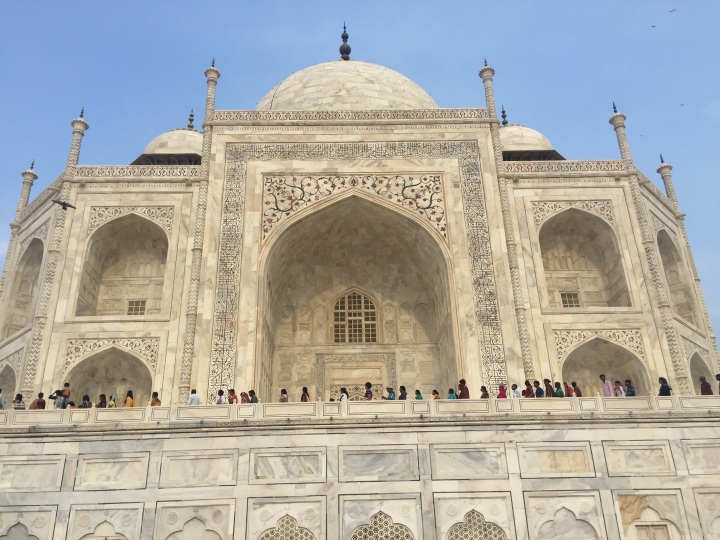 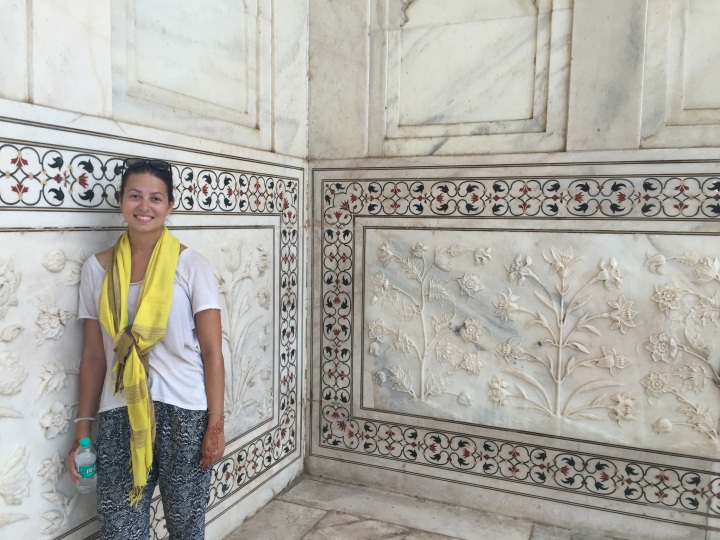 H – If you haven’t guessed by now, I think Taj Mahal is one of the most wondrous and astounding sights I have ever seen in my life. I still cannot quite grasp the extent of extravagance and craftsmanship that went into building it. As gay as it sounds, the love the king had for his wife actually is palpable. Even as the skeptic of this couple, I am overwhelmed, and then some, by how much it awed me. Go see it if you have some money to burn. Then fly out of India.

That evening we drank a couple of beers and ate dinner at the hostel along with a couple of other guys staying there (1 German, 1 Malaysian).  The hostel offered 2 options for dinner, VEG and NON-VEG.  We hadn’t had meat since we’d arrived in India so we tried the NON-VEG option.  It was OK, but I think going forward, I will stick with being a vegetarian while here. It is easier and you don’t have to worry about the meat being wonky.  I may have to post a separate post on the food here.  It has all been very good, but my stomach has been taking some time to adjust.  It is just different than what I am used to.

Well that is all for now!

Agra – We walked a little over 5 miles while sightseeing.