Hi everyone!  Hope you’re doing well!  I am blowing up these posts lately because I am trying to catch you up.  I feel like I’ve fallen behind (thanks to Myanmar’s Wi-Fi) and if I am going to keep this up, I need to stay on top of it!

After Jaipur, we headed to the small town of Pushkar which is also a holy Hindu site and supposedly does not have meat, alcohol, or even eggs!  We soon learned that you can still find food with eggs and even purchase beers there, but it is never advertised and is somewhat done in secret. Hoch – we learned that Indians in these “holy cities” do in fact drink and get fucked up, but never in public. The stigma against alcohol is strikingly similar to the marijuana’s in the U.S.  Pushkar is rather small and more on the chill side.  There is a small lake in the center and a few streets with shops and restaurants.  There are still touts trying to sell things, but they are not as persistent or aggressive which is a nice change from the other cities we’ve visited so far. H – the shopkeepers were very reasonable. I am still convinced that taxi and rickshaw drivers are the worst, closely followed by “priests” who sell blessings.

We decided to take the time in Pushkar to relax a bit since we did sooo much sightseeing in Jaipur.  We stayed at a hostel there and met a few people that we ended up running into in other cities during the rest of our time in Rajasthan. 🙂

I was also able to sign up for my first yoga class in India there (Hoch decided to pass). H – In my defense, I was sooo tired from sooo much sightseeing.  To be honest, it was a bit underwhelming for me.  I have taken several types of yoga in the states and really like a good challenge when I exercise.  The class I took was a Hatha yoga class which is a slower style yoga.  I learned from the instructor that Hatha is the main yoga in India and that other parts of the world have steered from the basics and created several other yoga types, but that Hatha is the original.  After a warm up, we started off with a variation of a headstand, moved on to balancing poses, and then did several basic yoga stretches, which is a little backwards than what I am used to (usually complete balancing poses and head or handstands in the middle or end of the practice instead of at the beginning).  You always hold each pose twice, stretching a little deeper the second time around and you always complete opposing stretches.  For example, a forward fold would be followed with a backbend stretch.  It was good to get a good stretch in and to learn a little about yoga practice in India, but I am still partial to more challenging types of yoga.  I will try a few different classes as we travel to compare and see if it grows on me.

The one thing we did while in Pushkar was hike up a rather steep trail to see the Savitri Temple along with views of the area.  We ended up walking it with a guy from the hostel, an Argentinian/Italian named Martin, who has been traveling all over India for several months.  The temple was actually under construction so we did not see it, but did enjoy the scenery and got an awesome workout (AKA trek training) that day.

The rest of our time in Pushkar was spent lounging around, walking through the market, visiting a popular Brahma temple (do not have photos of this, it wasn’t anything special), visiting a small ghat in the lake, and trying to find a place with beer.  We successfully found a place and were able to have one round of beers with dinner before they ran out. H – I had never been so disappointed after a beer. 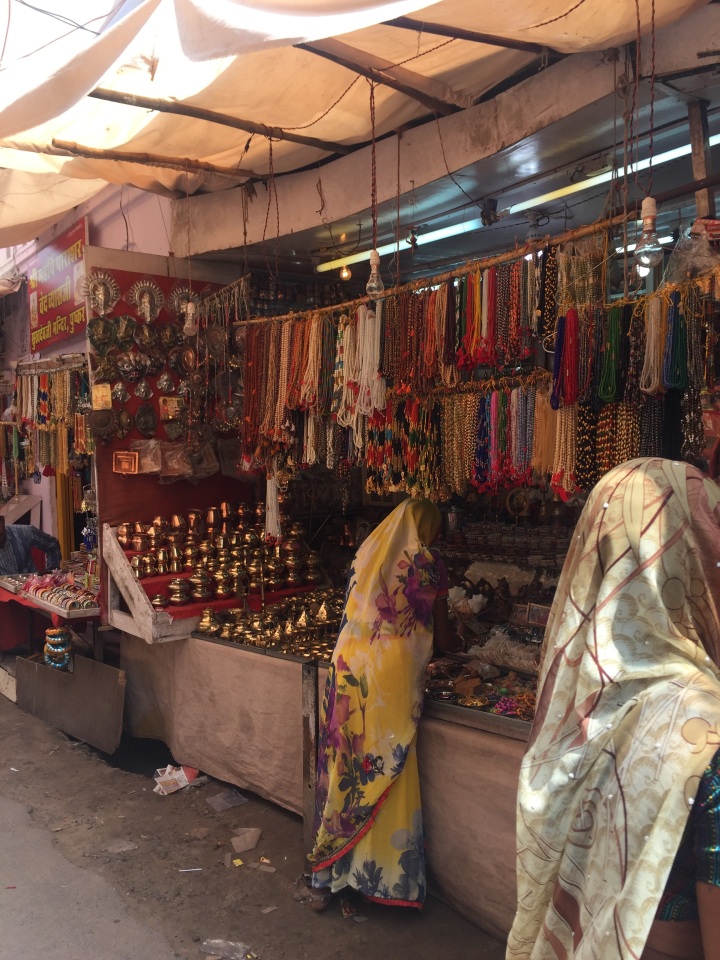 For the rest of this post, I thought I would elaborate a bit on Indian food.  We have not been too adventurous as far as trying street food (for fear of getting sick), but we have tried several Indian dishes.  For the most part Indian food is not very photogenic, which is why I haven’t included many photos, but I still try to take shots from time to time.  Hoch actually has much better taste buds than I do.  I always try to pinpoint what spices I am tasting and he tries it and almost immediately knows what spices are in the dish, so I’ve asked him to help me write this part of the post.

Hoch – Indian food is so packed with flavor from herbs and spices, which is probably why it is eaten with much rice (preferred by Southern India) and/or bread (Northern India). There are several different kinds of bread, most of which are flat and made fresh with different grains. The naan (refined wheat) is the biggest and airiest, while the chapati (whole wheat) is smaller but also denser. You can get any bread with butter or garlic or whatever on it.  Most dishes are what we’d call curry, a term that I have not come across on any menu. I’ve had to do some last minute googling to understand menus as they vary from region to region.

For a meal you’d get a few different kinds of curry/goop to share and eat with rice and bread. Even the most local of the restaurants we’ve visited provided spoons but I have definitely seen people eating with their fingers, and wash their hands afterwards at faucets.  When eating with the breads, which we prefer, you break off a piece and scoop up the goop. Sounds easy enough but gets a bit tricky when there are chunks of cheese (paneer, awesome) or meat (if they are COURAGEOUS enough to serve it) involved. Indians also eat only using their right hand, which means they rip off a piece of bread with just one hand and it boggles my mind every time I try to figure out how. I don’t wipe my ass with my left hand though so I have no issue using both hands.

I’d had Indian food plenty of times in NYC (never on dates), but I’ve really come to appreciate the flavor and variety after having had to subsist on it for the last few weeks. Some of my recent favorite and recommended dishes are:

Also, can’t forget to mention the ubiquitous “soda with lemon,” which is a glass of fresh squeezed lemon juice and plain soda/seltzer. Simple yet so refreshing and something we will add to our repertoire back in the States. In case anyone is wondering, we think chai is fine. It’s just regular black tea with milk and sugar, maybe a dash of cardamom if you are fancypants.  Masala chai is much more unique and tastes like India.

(KR adds) I will add that they like it spicy!  I will say “no spicy” and it will still have some kick.  I would say my tolerance for heat as gone up, but at the same time I cannot always handle it and Hoch has a good laugh from time to time.  I would say we have both lost some weight since we’ve come to India due to minimal alcohol consumption, no beef or pork, and (for me) the amount of spiciness in some of the dishes.  I will eat just enough to sustain me, but no more.  I am sure we will gain it back once we hit up Eastern Europe though.

Until the next one!

Pushkar Day 1 (Travel Day) – Arrived in Pushkar, walked around 3.5 miles while getting familiar with the town.

Pushkar Day 2 – Yoga class in the morning and we walked about 10 miles including the steep elevation increase of about 580 ft at the Savitri Temple (it was super-hot and I was sweating like a crazy person).