Hi guys! How’s the week going? Are you ready for the weekend? I am super excited to be flying to NC to visit with family! It will be a short trip, but then I’ll be back soon enough for Thanksgiving! 🙂

So this will be my final post on Chile.  After stopping in Copiapó to see the desierto florido, we took an overnighter bus back to Santiago just in time for the start of the dieciocho celebrations.  September 18th (which was on Monday this year) is the Chilean Independence Day and is pretty much a week of celebrations.  Everyone always spoke highly of it, so I actually pushed my flight back further so that I could stay for it.  I decided to split my time between Santiago and La Ligua so that I could get both the big city and small town celebration experience.

Cueca (pronounced kweka) is the national dance of Chile and is both sung and danced all week long.  The dance story is something along the lines of the rooster trying to woo the hen.

Chicha, which is a fermented grape or apple drink (in Chile), is served only during festivals like the Fiestas Patrias (Patriotic Holiday).  It tastes like a sweet wine and was different than the chicha that I had tried in Peru.

A Terremoto (means earthquakes) is the primary patriotic drink.  It is made with chicha, icecream (like a float), and grenadine.  Talk about a sweet drink.

Anticucho (massive kabobs) and of course empanadas and other typical Chilean dishes are everywhere.

Fondas are like carnivals or fairs in which you can find all of the above in one place, usually in a park or large tent in a lot somewhere.

You can definitely compare this holiday to the 4th of July in the states.  People go to the beach, spend time with family and friends, have cookouts (asados), and drink a lot (depending on the family lol).  The one thing that they have that we don’t is the whole fonda bit.  Santiago is massive so obviously there are several fondas, but in La Ligua they only had one and everyone in town was there.  It was so much fun (I danced the whole time) and of course it went until 5am!!!! Wouldn’t expect anything less from Chile.

I’ll let the photos do the rest of the talking:

Since the actual holiday was on a Monday, the celebration officially started on Friday and finished on Tuesday (so not quite a full week this year).  Either way, at the end of it, I was in need of a detox.  Way too much sugar and booze.

However, the detox would have to wait.  Jessie, Kate, and I decided to have one last hurrah in Valpo (where it all started).  We had a great last night filled with more good laughs, reminiscing of memories, dancing, and meeting random people (a given when in Valpo).  But it was definitely bittersweet saying goodbye to my travel buddies and friends for the past 6 months.  I know I will make it to Australia one of these days and when I do, they will be the first people I call.  I also know I have travel buddies for life.  We will have to continue to make new memories in other countries somewhere down the road (and of course practice our Spanish, right ladies?!).

It was even more bittersweet to say goodbye to my host family!!! We had a nice farewell dinner as a family and then the boys went home while Marcelo, Nancy, and I stayed and had a few more drinks.  The following day they took me to the bus terminal and tears started to well up during the drive.  It was the same drive we took when I first arrived and was seeing where I was about to live for the next several months.  I tried to hold it in, but it was impossible.  I cried while saying goodbye to them.  They were so sweet and easy to live with.  I will always have such great memories of my time in Chile due largely in part to them. 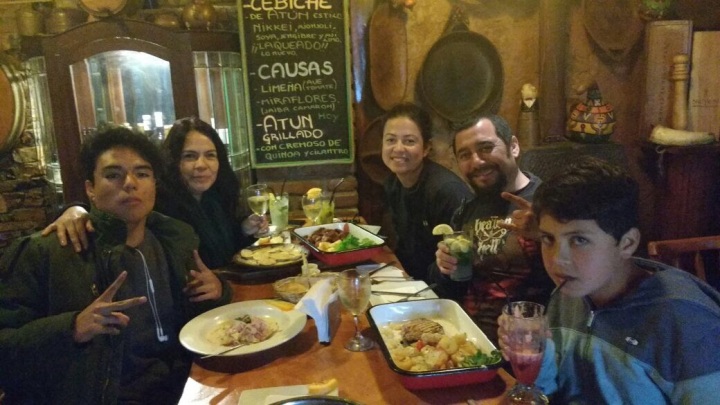 I know I will see them again, but it is always hard to say goodbye, especially when you don’t know exactly when that will be.

My time in Chile was like that travel abroad experience I never had.  I am so very glad that I actually did the whole teach English abroad thing.  I had always wanted to do it, but kept putting it off.  Life is too short to keep putting things off.  If you want to do something, you have to make it happen.  I am so glad that I got out of my own way, pushed whatever fears aside, and started reaching for my dreams. It gets a little easier with each leap you take.

Until next time Chile,

P.S. If you missed any posts, I’ve compiled all my Chile and post-program travel posts in one spot: Semester in Chile

One thought on “Chile: Celebrations and Farewells”