Since eastern Laos has very little to offer, there are two popular backpacking routes from Luang Prabang: go south to Vang Vieng to get catatonic from alcohol and magic mushrooms then continue onto the capital, Vientiane, or; simply head to Hanoi and continue the SE Asia loop. Kimberly and I chose on the latter without much discussion. The decision to whether to fly or to take this “nightmare bus” or “bus from hell” took a little longer.

There is no shortage of horror stories online about the 24+ overnight sleeper bus from LPB to Hanoi. Blogging backpackers generally are divided to two camps: it was horrible and a mistake, or; it wasn’t THAT bad. Both sides do agree that they’d never do it again. Full disclosure, I was being a bit of a bitch about the bus and kept revisiting the idea of just flying for $100 per person compared to 380,000 kips (USD 47) for the bus. Then I remembered my experience dictates most people are bigger bitches than I, and that we would be saving USD 100 which is at least two days of our budget. Also, essential to any backpacking experience is some discomfort and horror stories to tell over and over. 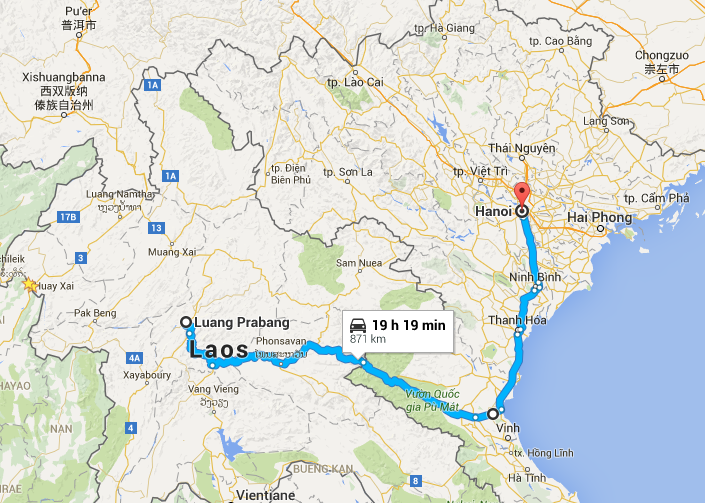 We booked our tickets via our guesthouse (Soutikone) for the price above, which I knew was a bit more than the actual price at the bus terminal (350,000 kips) but it did include pickup at the guesthouse and we were guaranteed seats. We arrived at the bus terminal where other backpackers were also waiting for the bus to let us on. There was a snack shop where you could get snacks and water for the long road ahead. You have to be careful though, the bus is notorious for making a limited number of bathroom stops. I saw one young man buying several bottles of Beerlao and wondered if he knew what the fuck he signed up for. The departure time was 1800 but we were not allowed on board until five minutes after. Even though our tickets promised seats 15 and 16 it meant nothing to the bus staff who herded all foreigners to the top bunks in the back of the bus where there is the least space per person. They also only seemed to know how to yell “YOU!!” and point, which I found humorous at first but eventually got to my nerves enough that I started imitating. He didn’t appreciate that.

The seats are not fully reclined, about 20 degrees max. It is enough legroom only if you are 5′ 5″ or shorter, which meant as a 5′ 11″ I couldn’t fully stretch my legs. It would have been possible if I had a lower berth or back of the bus where there was additional upper floor to cram more passengers and who knows what else – more on that later. There is even less headroom if you have the window seat, as the AC and lights (which was broken for us and could not be turned off) took up some space. It is quite claustrophobic at first, but you do get used to it a bit as the ride goes on. We had dinner consisting of ciabatta bread from a French bakery in LPB (expensive but well worth the money), watched an episode of Game of Thrones (Bran woke up!) and tried to sleep – sideways since I didn’t want to wake up with knee aches from having my legs bent for hours. It wasn’t the most comfortable sleep and we both woke up every couple of hours due to a combination of discomfort, curvy roads, and random horn honking from our driver who smoked occasionally. Also at this point I had to pee pretty bad (hydration is not your friend on this ride) but ignored it the best I could until we arrived at the Laos-Vietnamese border control.

The bus arrived at the border shortly after 0600 and we used the toilets (disgusting, no toilet paper) and waited until the customs opened at 0700. Foreigners lined up at the window but I could easily predict what was about to happen by the fact that all the locals (Lao and Vietnamese) were just squatting around (seemingly their favorite choice of passing time). Sure enough, as soon as the officials arrived they formed a shapeless mess at the windows, throwing their passports and money (for lubrication purposes, as visas should be free between the two nations). Somehow, us backpackers held our ground and reserved one window for us which was a rare win. After getting our stamps we walked about 5 minutes to the Vietnamese customs building, the state of which I’ll let the video below do the talking.

More of the same; flying passports and bills, hungover looking officials. In addition was an x-ray machine for luggage which I doubt was even being monitored half the time. I may have elbowed a small child who tried to cut me in line. Little shit. With several new stamps decorating our passports, we boarded the bus again. We tried to read and stay awake more for the second half, which was hard purely due to boredom. Lunch stop at a nondescript restaurant was uneventful as we chose not to eat anything there and avoid any unnecessary restroom stops.

Once we were in Hanoi’s suburbs, the large bus snaked its way into a street and parked in front of a hardware store. I really wish I had a video of what happened next. The bus staff removed mats from the bus floors and hiding beneath them were wooden doors.  Two doors on the top and one on the bottom.  The staff quickly unloaded them, removing the “end covers” from the doors that made them look like additional mats.  Then out of the rear of the bus’ hidden compartment, half dozen fans from Thailand. We were both incredulous and entertained by this high-tech smuggling operation and I wondered how much the customs officials got paid to turn a blind eye. Also, who knows what else was smuggled.

We arrived at Hanoi’s “minibus station” south of Old Quarter around 1830, exactly 24 hours after our LPB departure. I had read warnings about not getting a taxi ride from the hawking drivers waiting for us since either they will try to agree on an inflated price and rip us off or run dodgy meters and rip us off. Instead we joined forces with another couple from France and ventured out to the streets. A smiling local tried to arrange moto-taxis (xe om) for us for 200,000 dongs (USD 9, hehe) so I told him to fuck off and hailed a taxi that ran a faithful meter and took us to the hostel for 50,000 dongs (hehe) per couple.

We were tired and glad to have arrived at the hostel that greeted us with a free cold beer upon check-in. Overall, though, I would say the bus ride is nowhere near as stressful as what some of the bloggers had warned. Granted, there are stories of the trip being longer than 30 hours due to road conditions and even more questionable bus staff but as long as you do your research and know what to expect, the discomfort is worth the savings and experience – if those things are important to you as a backpacker.

I don’t have much to add on to what Hoch said above, it was definitely not the most comfortable mode of transportation, but it could have been worse.  I will add that there is no additional space for your carry-on items, unless you are on the bottom floor and can use the aisle.  We shoved our stuff where our feet were supposed to go which meant even less leg room.