Hi everyone!  Another quick post here!  The last few days have been a whirl wind of cities so I am trying to catch up before I get too behind on the last bit of our adventure.  Today’s post is about how we spent our time in Serbia.  To start, we took an overnight train from Budapest to Belgrade.  The train looked like this: 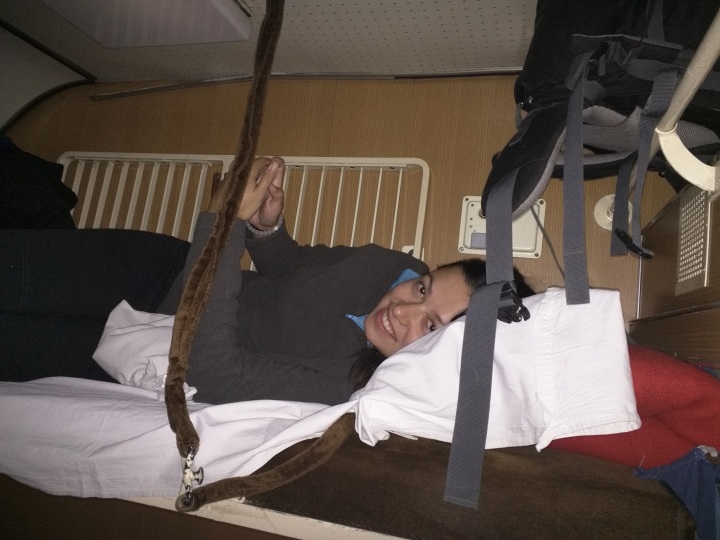 It actually was not as bad as it looks.  The beds were comfortable, but the train temperature was pretty hot.  I ended up not using a blanket and taking my fleece off in the middle of the night and I was still warm (not complaining, at least it wasn’t the opposite).  Hoch – I’m pretty sure the conductor was smoking cigarettes all night, as a waft of smoke would wake me up from time to time.  Also, we had a couple of midnight interruptions as we crossed the border.  Immigration at the Hungarian border ran on to check our passports around 1am and then we were back asleep before a second interruption about an hour later at the Serbian side.  We arrived at around 6:45am and had gained an hour due to day light savings.  We walked out of the train station and instantly felt that Eastern European vibe that I think of when I think Eastern Europe.  Cold and gray architecture along with that quiet, vacant, and a slightly sketchy feel.  The fact that it was a cloudy morning did not help either. H – also, tracksuits. So many tracksuits.

We were planning on taking public transportation to our Airbnb apartment, but when we tried to purchase tickets the lady at the kiosk did not know how to speak any English other than the word no.  We also tried to ask a guy at the stop where we could buy tickets since clearly it wasn’t happening at the kiosk and he also did not understand us. H – he did try to help and asked if we speak German, which, um, no. No English = Another sign that we were further east.  So, we ended up walking which took about 30 minutes which wasn’t too bad, luckily.  We were thinking we may need to learn a little more Serbian than the usual “thank you”, but it turns out we just had bad luck since a lot of people do in fact speak some English.

After checking in we ended up being a bit lazy and not heading out until mid-afternoon.  We stopped and ate a late lunch and then joined a 4pm walking tour of the city center.  The walking tour was pretty good and covered a nice mix of city history and Serbian culture without being too long.  We even tried free samples of rakija (pronounced rah-key-ya; j is pronounced like a y, think Jagermeister) which is a fruit brandy popular in the Balkans.  During the tour, I decided that I liked Belgrade, but wasn’t exactly sure why (maybe it was the rakija).  The architecture is a mixture of types and isn’t exactly cute or pretty when you mix them together.  I think it may be the vibe of the city that I liked.  Belgrade is known to have a great nightlife.  People aren’t overly nice, but nice enough and as the day transitioned to night, the atmosphere shifted as people started their evenings out.  So, I think that slightly energetic, fun vibe is what I liked about the city.  Since the tour was later in the day and the sun set midway through, we ended up returning to several of the same areas the following day to see them during the day (and take pictures) as well. H – Interesting thing about the walking tour and its guide were the comments she made about Marshall Tito and Slobodan Milosevic, two of the most influential rulers of Yugoslavia/Serbia. As I understood, from reading and watching the news while growing up, these two were basically war criminals, albeit charismatic, who did some bad things – especially ethnic cleansing. The guide, who was an intelligent and well-educated young woman, seemed to downplay the factual misdeeds as exaggeration and in general betrayed a sense of bitterness against the rest of “Western” world for not taking their side during the NATO bombings or whatever. Nationalism is a valuable thing but perhaps Serbians could take a note of how Germans teach the Nazi Third Reich in schools. Seriously, Milosevic was a gigantic ass.

We learned during our tour that Skadarlija Street used to be a typical market.  But then a Czech guy moved in and started brewing beer in the neighborhood.  People started selling beer along with whatever else they were selling and soon learned that beer was the way to go and ended up ditching selling other items.  Now this street is a popular area with several bars and restaurants.  The old brewery smokestack is shown in the picture below.  There are now a few different bars and clubs in that brewery. 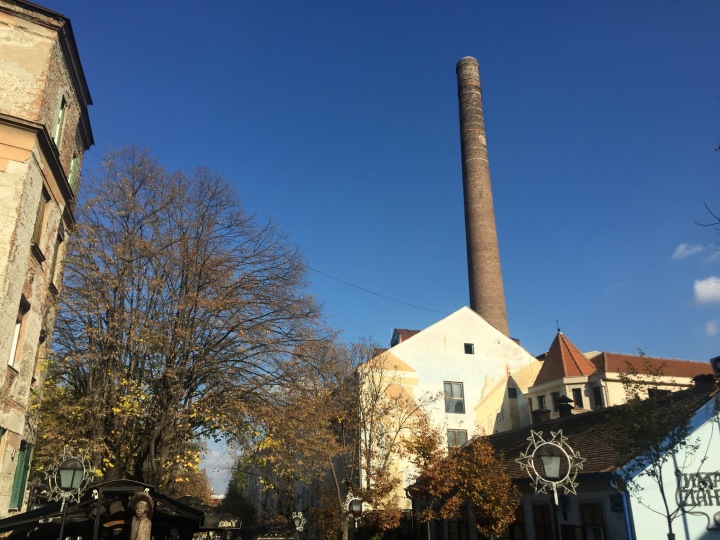 Fun fact: Belgrade translates to “white city”.  But as you can see from the pictures, the city is more gray than white.  Well back in the Roman days, the Belgrade Fortress was made of white stones which is how it became known as the white city.  The city was overtaken several times over history and the fort rebuilt time and time again due to damage and new rulers.  So now the fort is made of different materials and architecture styles throughout.

Some views from the fort:

The city architecture is a mixure and is quite random at times.  If a building was destroyed during war times, a new building would be rebuilt in whatever style was popular at the time.  So you have a mish-mash of architecture everywhere you look. H – Simplified, this area of the Balkans has had a long history of different rulers; Ottoman Empire (Turks), Austro-Hungarian Empire, then the non-alignment communist dictatorship under Marshall Tito. The picture below shows the various influences.

We also were able to visit Zemun, a historic town and one of Belgrade’s municipalities.  It only became part of Belgrade in 1934 and has slightly different architecture than the rest of the city.  We walked through the area and along the river passing several restaurants along the way.  I can imagine that the area is rather nice and busy when the weather is warmer.

After visiting Zemun, we took a bus back towards the city center and visited the Church of Saint Sava, a Serbian Orthodox Church.  It is still undergoing construction (mostly inside) and will probably not be complete for another 20 years.  It is one of the largest Orthodox Churches in the world. 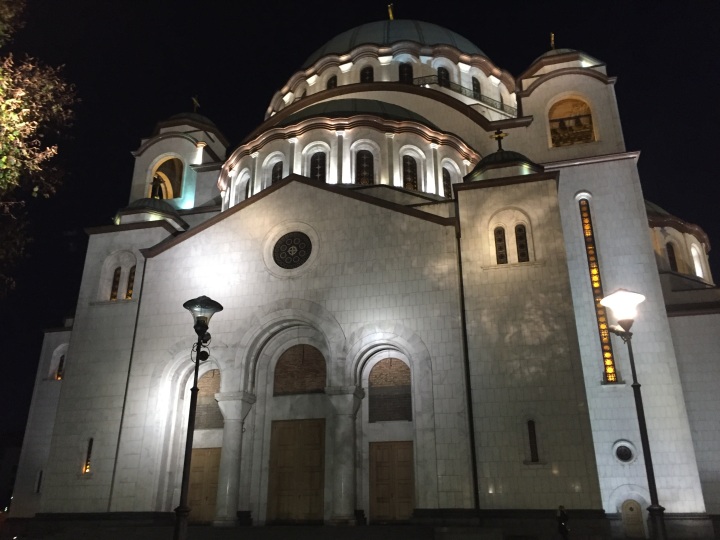 We ended the night with rajika samples at a rakija bar. We tried plum, pear, apricot, raspberry and honey (left to right). The plum is the traditional one and happens to be the strongest.  The raspberry was the sweetest.  I really like rakija.  No need to mix anything, you drink it straight and it is strong enough without making me want to vomit.

We quickly determined that we booked one too many nights in Belgrade as there isn’t a lot of sightseeing to do.  So, we decided to check out Novi Sad which is a smaller city located a little over an hour north of Belgrade.  The city was bigger than I was imagining, but the city center was like every other cute European city that we have already seen.  So, while it was nice, it wasn’t anything new and exciting. 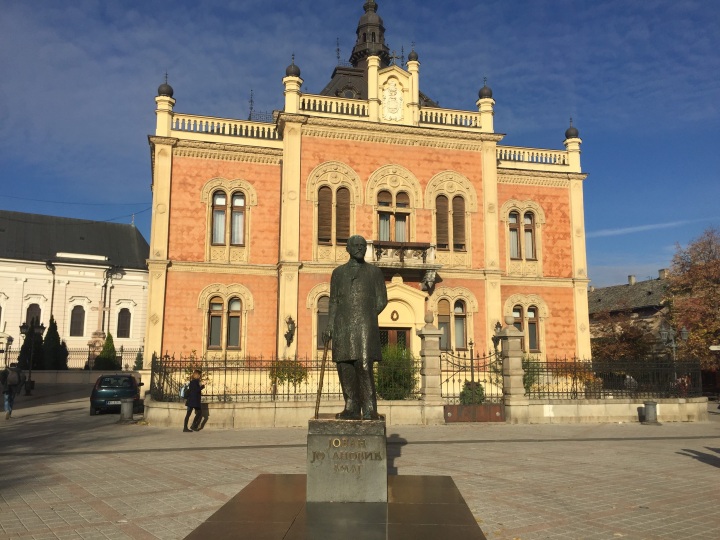 After returning from Novi Sad, we ended up grabbing a few drinks in Skadarlija.  I was enjoying people watching and to be honest wished I didn’t look like such a backpacker.  It was easier “fashion wise” in Asia, but in Europe and especially this part of Europe, everyone looks so nice!  I noticed girls with high heels walking on the cobble stone road and kind of missed being that girl (not the walking on cobble stone part).  I know beauty and self-worth comes from within, but dressing up from time to time doesn’t hurt either.  It made me miss a good night out on the town with my girlfriends.  No offense to Hoch, but I think he’d rather die than get dressed up to go out dancing. H – I do try and dress nicely and somewhat keep up with the trends, but the part about dancing is a fair point.

After a few beers and rakija drinks, we decided to find a quick place to eat a late dinner and preferably something not Serbian (AKA loads of meat).  We initially tried a pizza place, but it was packed with locals which probably meant it was good, but we did not want to wait so we left.  We came across a place called Gyropolis that looked quick and had some clientele so we went in to check it out.  We both rolled with the classic gyro and my convo with the cashier went something like this:

Me: “Classic Gyro”
Cashier: “Chicken or Pork”
Me: “Pork”
Cashier: “Which sauce”
Me: “Tzatziki”
Cashier: “Only one sauce?”
Me: “I can order more than one sauce?”
Cashier: “Yes, however many you want” (‘of course you can’ look on her face)

I quickly ordered another sauce with feta cheese just because I felt I needed to based on her response to my only ordering the one.  We then took a seat and waited for our number to be called.  Well let’s just say I will dream about that gyro for the rest of my life.  I don’t know if it was the previous alcoholic beverages, the double sauce order, the french-fries inside or a combination of the three, but that gyro pita deliciousness was EVERYTHING.  Hoch and I were contemplating opening a Gyropolis in a college town in the States because that shit would be money.  It was soooo good. H – It was definitely the booze. I’ve had my fair share of drunk gyros, though, and that was one of the best ones for sure. 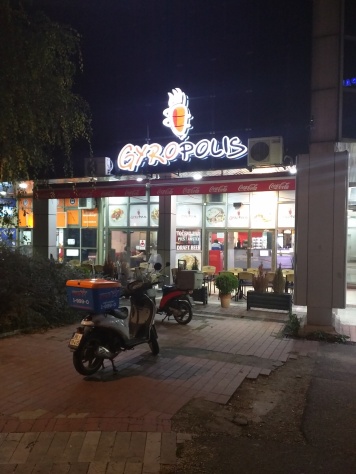 We decided to leave as early as we could our last day there since the drive was long and we had only scheduled a couple of nights for our next destination.  The rest of the trip is pretty much planned out since the clock is winding down.  Our flights are booked and though we don’t want to rush through cities, we still have a decent list of places to fit in and it is gonna be tight.

In retrospect, I wish we would’ve stayed in a hostel instead of an Airbnb here since the city itself does not have a lot of things to see so the extra social aspect would’ve been nice.  And I would’ve been able to see more of the night life with other travelers since Hoch wasn’t feeling so well anyways (I hope I don’t get the same bug!).

Here are additional photos from our time there:

Next post will be on Bosnia and Herzegovina so be on the lookout for that!