Hi everyone!  I am back with yet another recap of my time in SA.  This will be my last post on Argentina and then I will have 2 more Chile posts before I am finally caught up (almost there!).

As I mentioned in my last post, Kate and I decided to fly to the city of Salta from Buenos Aires.  It is located in the Salta province which is one of the northwesterly provinces in Argentina and is a 20 hour bus.  The Jujuy province is just north of Salta and borders with Bolivia.  Due to their proximity to the Andes and Bolivia, both Salta and Jujuy have more of an indigenous cultural influence which gives them a different feel than the European vibe of the rest of the country, especially Buenos Aires.  One of the main reasons we wanted to visit the area.  And as it turns out, I am really glad we did.

I decided I’d break this post up based on cities/highlights of our time there.

We only had one full day to explore and started out with a visit to Museo Arqueologiá de Alta Montaña (a museum about sacrificed Incan children similar to the Juanita museum in this post).  The rest of the day, we ended up taking it easier than planned due to the teleférico (cable car) to Cerro San Bernardo being closed for maintenance 😦 .  So instead of walking the hill, we ended up trying local empanadas and tamales from El Patio de la Empanada which were amazing!  Food over exercise for the win.

A couple of shots of the Cathedral de Salta: 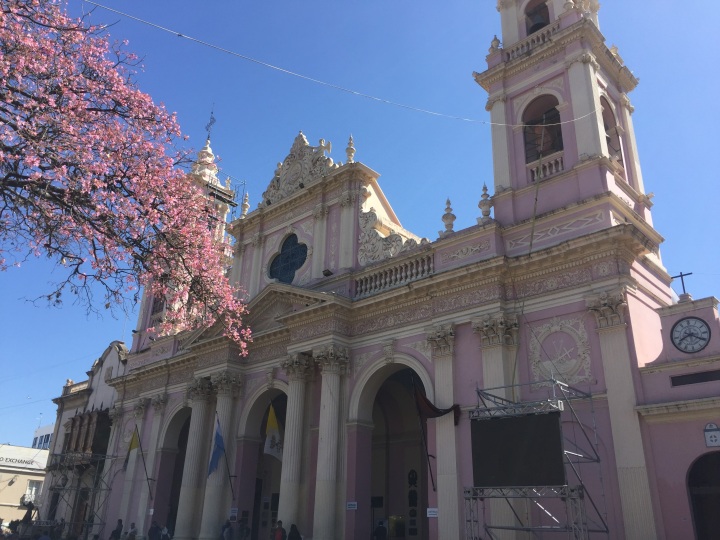 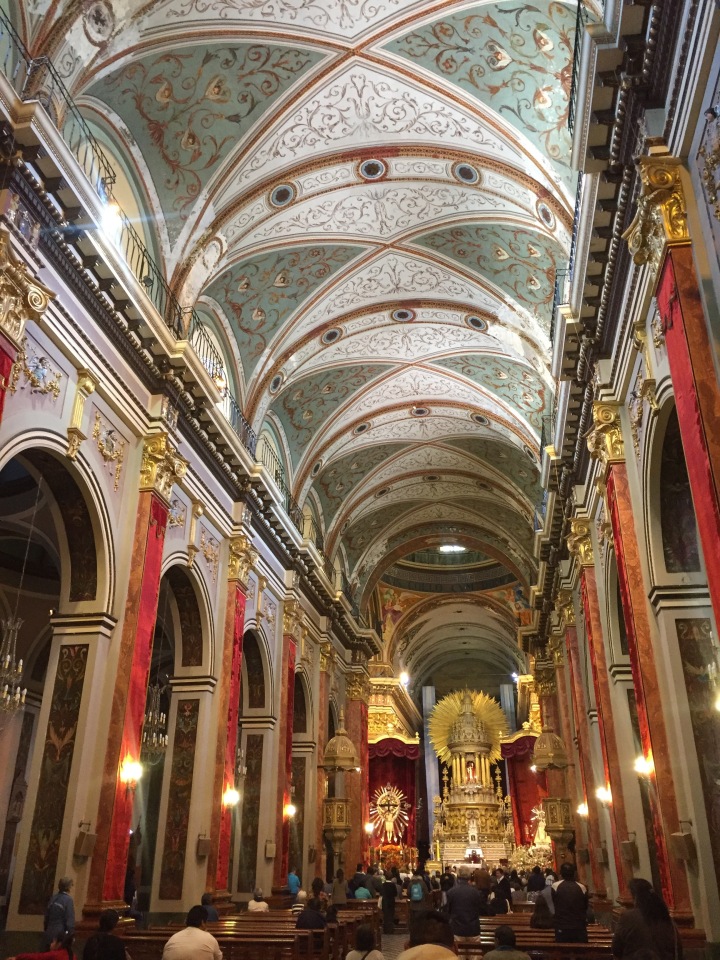 This day ended up being a day trip to the small town of Cafayate (known for its wine and vineyards) and back to Salta with stops at view points along the way in the Quedabra de las Conchas (Gorge of the Shells).  The mountains used to be under water and came up when the Andes were formed.  Seashells and other fossils can still be found in the rocks, hence the name.  The drive was really scenic and some of the views were breathtaking.  The area also had more of a dry, desert feel to it. 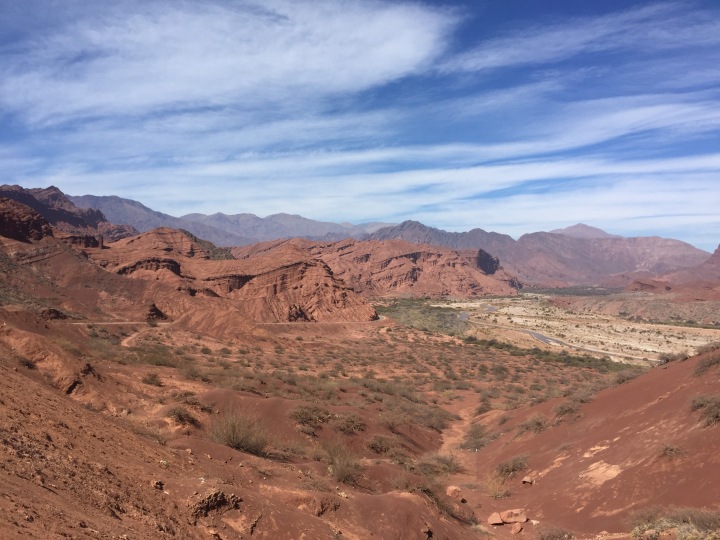 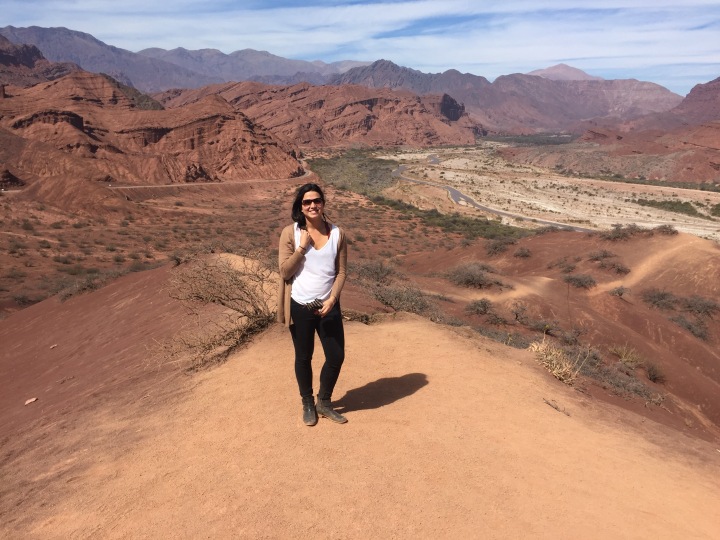 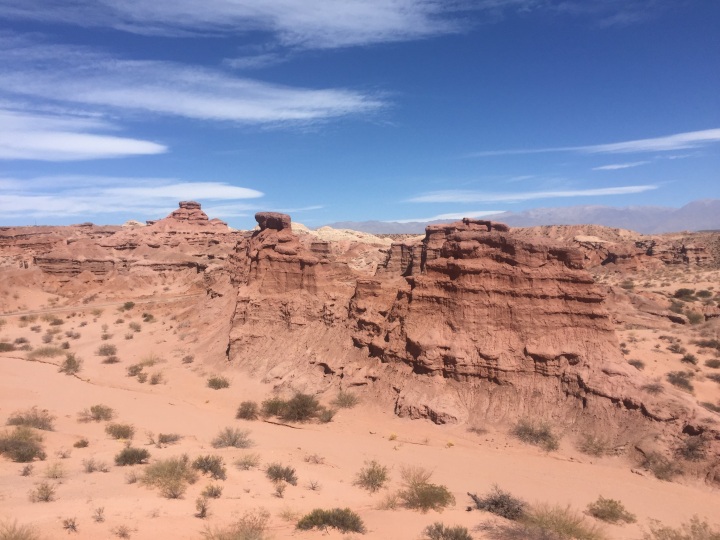 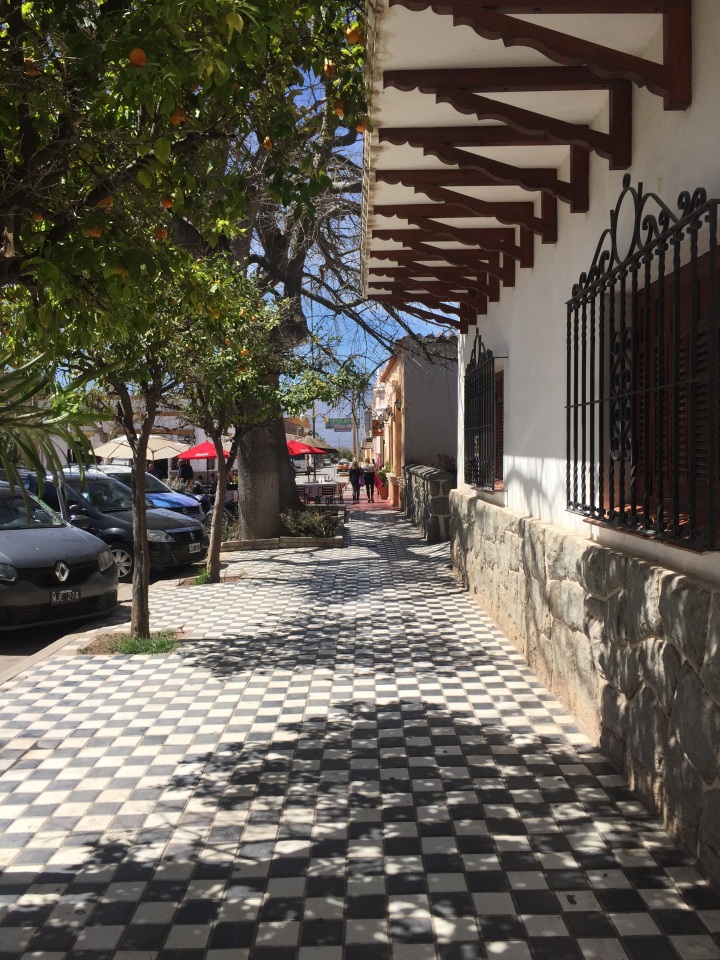 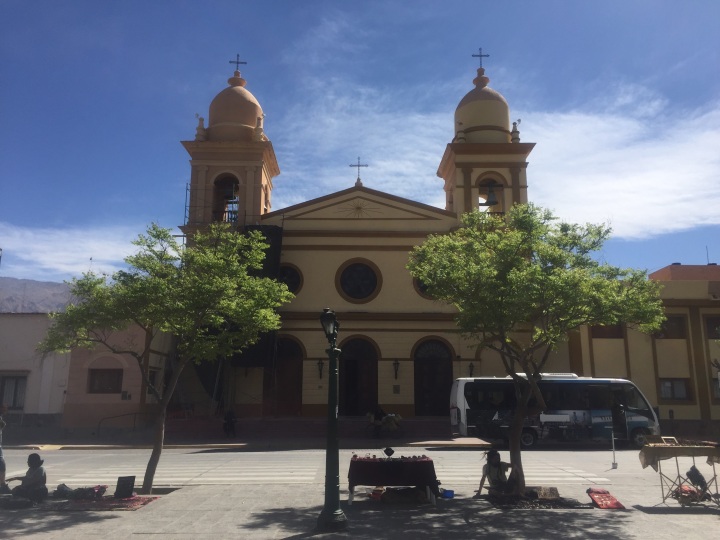 We enjoyed some beers by the plaza and ended up going to a bodega (winery) for a wine tasting before heading back to Salta. 🙂

I’ll go ahead and say this was my favorite stop of all our time here.  The town of Purmamarca was adorable and the surrounding views were astonishing!!

Before I share photos, I have a quick story……  Upon arrival to our hotel, I realized my prescription glasses and case fell out of my bag on the bus!  I called the number on the bus ticket, it was a wrong number.  I emailed the email address on the bus ticket, it bounced back instantly.  Again, another reminder that I am in fact in South America (like for real people, update that shit).  I looked on Facebook and messaged the bus terminal in Salta (there isn’t one in Purmamarca) and luckily someone responded with a number to call.  I called that guy, tried my best to communicate the issue in Spanish and he gave me a cell number to a different guy.  FINALLY, I got ahold of someone from the bus company and explained the situation (again as best I could in Spanish).  The guy actually found my glasses and sent them on the bus the next morning.  I waited anxiously at the bus stop and was ecstatic when it showed up and the driver handed me my case and glasses intact!  That could’ve been really bad since I don’t have many single daily contacts left.  Luckily for me, that was the only time I lost anything of significance on this trip and I was able to get it back!

Anyways on to the good stuff….

Walking around the path at the base of the Cerro de los Siete Colores (Hill of 7 Colors): 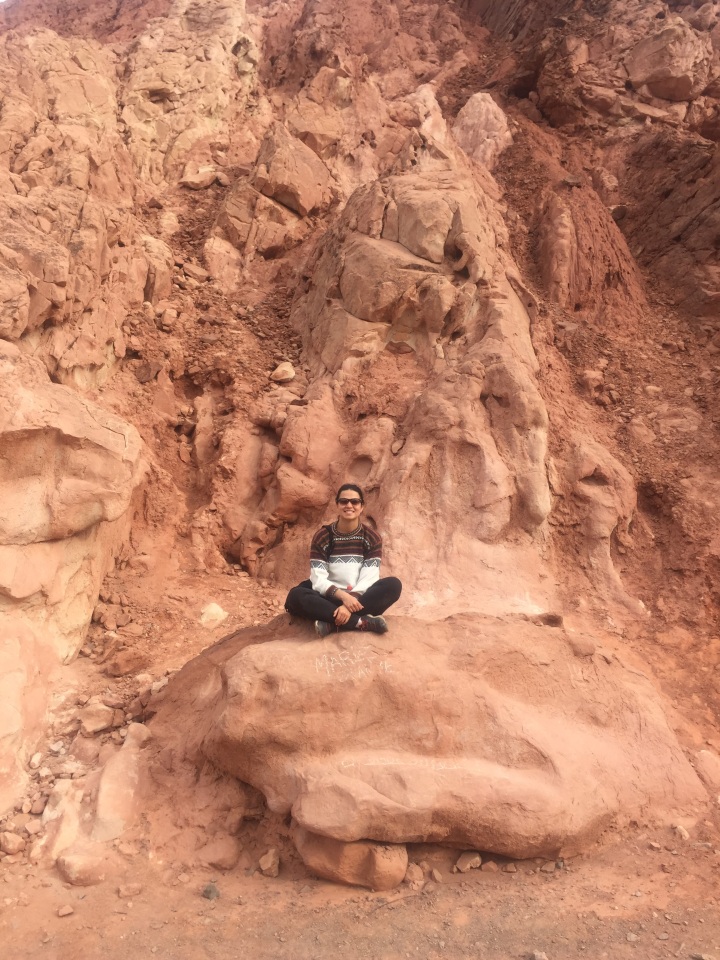 Our first night in town, we ate dinner at a Peña, an establishment in which you can try local cuisine and listen to live folk music.  The owner liked us and kept giving us more wine and dessert saying “te invito” which means “its on me”.  Turns out he was Chilean.  Free wine is the best kind of wine. 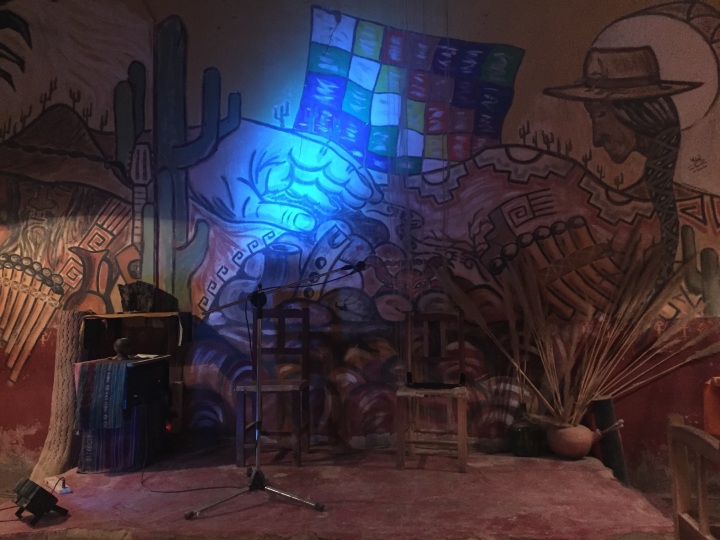 The following day was the reason why I liked this area so much.  We walked a hidden trail across the main road from the town and were able to better see all the beautiful colors of the surrounding hills.  The mountains were all formed at different times and made of different minerals, which is why they are all different colors. 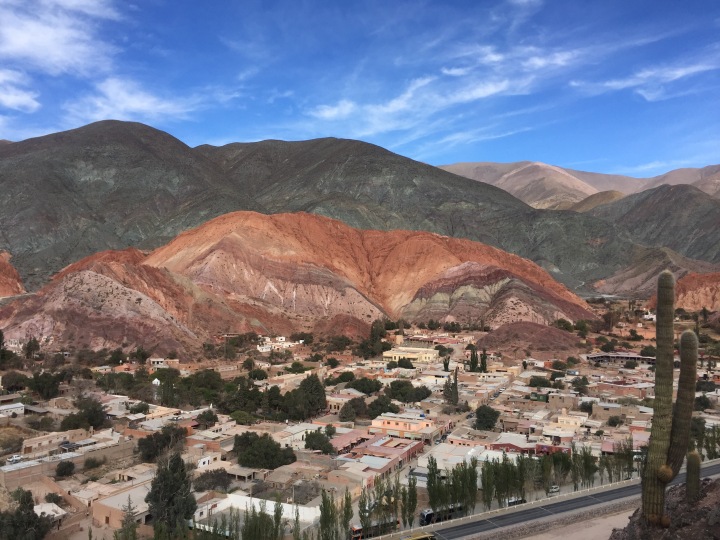 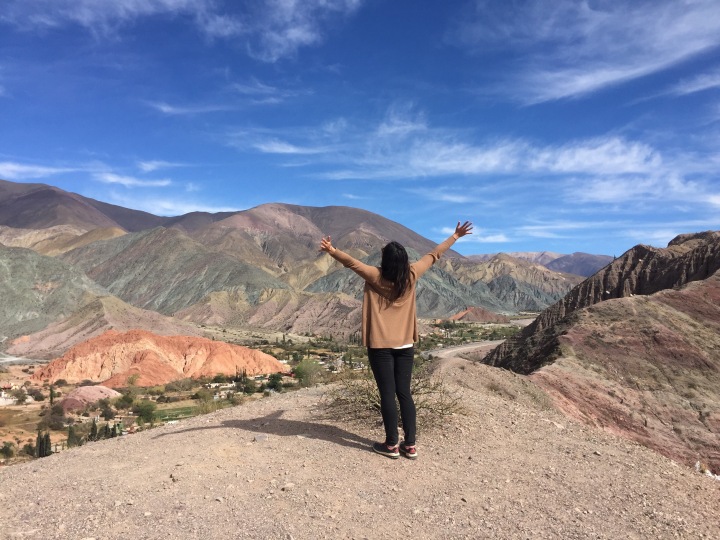 I loved it so much, I could’ve sat up there all day.  A big thanks to the maps.me app for helping me find this hidden trail.  We were the only ones up there!

The Salinas Grandes (large salt flats) is the largest in Argentina and was fairly close to Purmamarca.  There are several colectivos that go there and it is a half day trip.  So we decided why not.

In order to get there, we had to go over high mountains and the roads looked like this:

It was such a beautiful drive.  Our driver was telling us a bit about the area as we went.  As we approached the salt flat, he explained the difference between a “salina” and a “salar”.  You may have heard of the Salar de Uyuni, the largest salt flat in the world.  I was actually wondering what the difference was before and assumed it was just a different way of the saying the same thing.  So fun fact: it turns out a “salina” only contains salt while a “salar” has salt and other minerals. 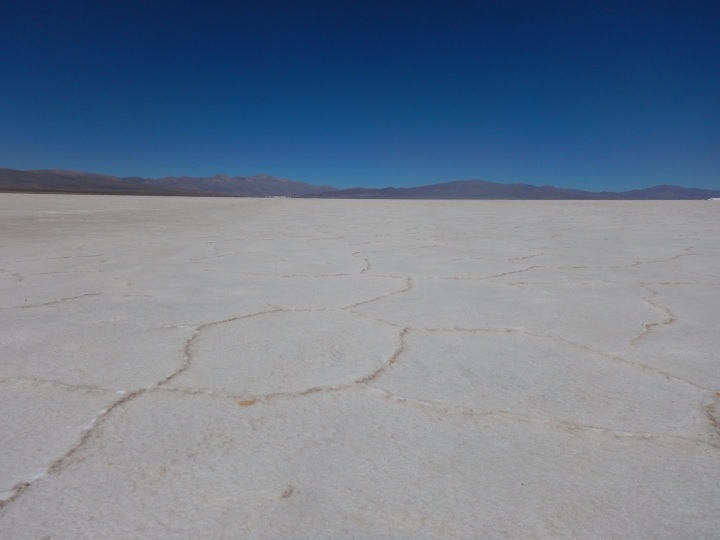 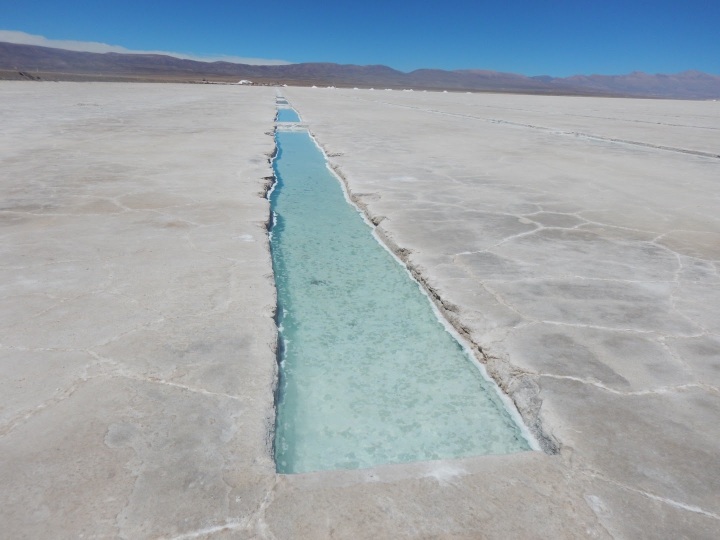 Well that is it for my Salta and Jujuy recap.  As I mentioned earlier, only a couple more posts to go before I am all caught up!

2 thoughts on “Argentina: Salta and Jujuy”