Hi everyone!  Hope you’re having a good week!  For today’s post, I am going to cut straight to the chase and tell you about the next couple of cities that we visited in Myanmar, Bagan and Mandalay.

To start, we arrived in Bagan (bah-gahn, formerly Pagan) at 4:30am.  Though the VIP bus was comfortable, it hardly counts as a good night’s sleep, especially with such an early arrival.  Luckily for us, our guesthouse had a room just for those early morning arrivals.  It was pretty large and had several mats for guests to sleep on when they first arrive (and can wait in until their room is ready).  We almost immediately fell back asleep and then the owner woke us up around 9am and asked if we wanted breakfast.  Breakfast was included with our stay, but we did not expect to receive it on the first day before we’d even checked into our room.  It was a nice surprise and gesture.  We ended up liking the guesthouse a lot (with the exception of the Wi-Fi, of course).

After officially checking in, we decided to rent an E-bike (battery powered scooter) for the afternoon.  We ate lunch at a local pizza place, which was awesome and a much needed change from typical Myanmar dishes.  After lunch, we rode through the national park stopping at any pagodas that we wanted to visit along the way.  This park was different than any of the other ruins we’ve had the chance to visit so far.  The pagodas date back to the 11th century when the Kingdom of Pagan (the first kingdom to unify the regions now known as Myanmar) was at its greatest and even occupied parts of Siam (Thailand) and Laos.  Some pagodas were in better condition than others and most were very simple.  Each pagoda up close doesn’t even compare to some of the wats in the Angkor Wat National Park, but the beauty of these pagodas comes from the quantity of them.  You could climb to the top of a few and see the amazing views of the surrounding area and pagodas, which is the best part in my opinion.  A popular thing to do in Bagan is to ride a hot air balloon at sunrise to see the views!  It sounds amazing and something we would have liked to splurge on (over $300 per person for a few hours), but unfortunately it is not available during the wet season.  So we may just have come back another time to try that out. 😉 Hoch – the wonder of Bagan is the fact that there were over 20,000 pagodas at one point, of which 8,000 remain. They are spread across a large plain surrounded by dramatic peaks and a lake that provide a nice backdrop to the hundreds of pagodas visible in any direction. I tried to imagine the bustling city that must have existed on what is now a sparse jungle. 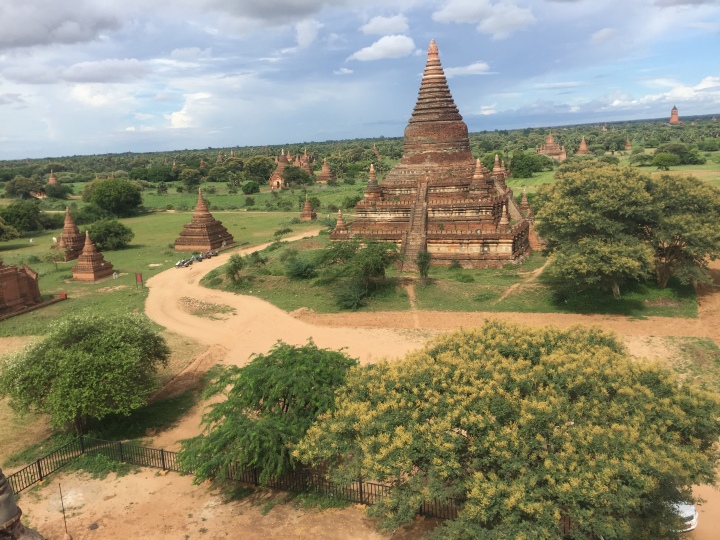 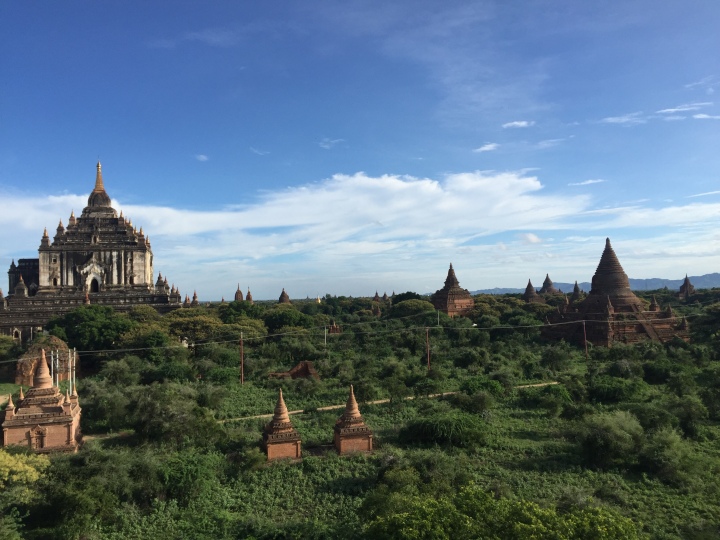 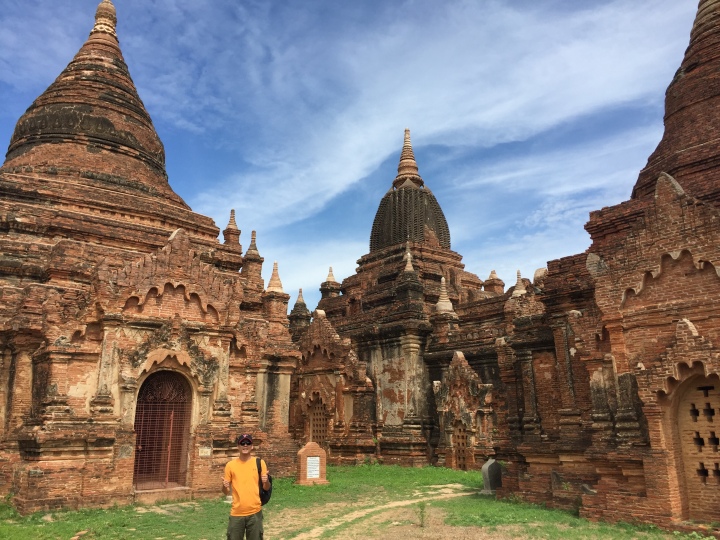 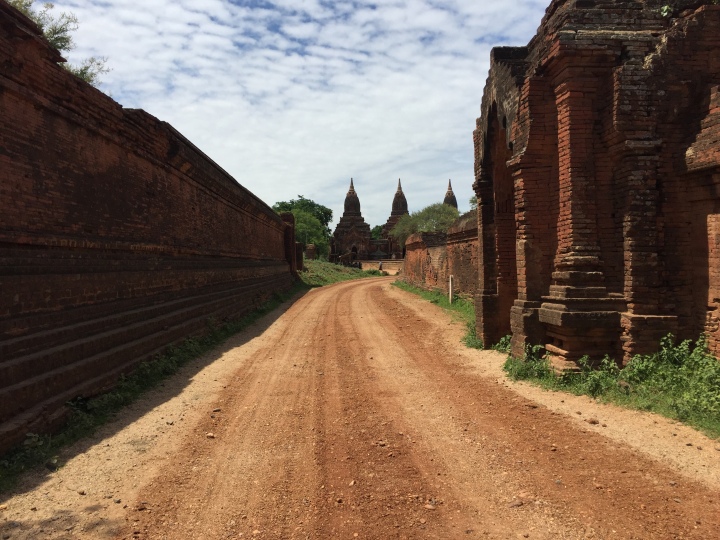 Day 2 in Bagan consisted of the same, renting an E-Bike and exploring more pagodas.  I will be honest; I am not sure which pagodas we visited (we tried to keep track, but there are just so many) so I will skip trying to name them all on here.  Unless you are a huge history buff, I think it is best to just wing it and visit them on your own schedule.

By Day 3, we were pagoda’d out and decided to go on a Wi-Fi hunt instead.  From what we could tell, a lot of the restaurants had better Wi-Fi than our guesthouse, so we rode around to a few different ones and did a little planning for the remainder of our time in Myanmar.

Per usual, we took plenty of go-pro videos and will compile a video of the pagodas in Bagan and post it here on the blog when ready!

We arrived in Mandalay around 1pm and apparently it had been raining cats and dogs the night before because several of the streets were flooded!  It ended up taking a little longer to get to our homestay, but was definitely crazy to see. 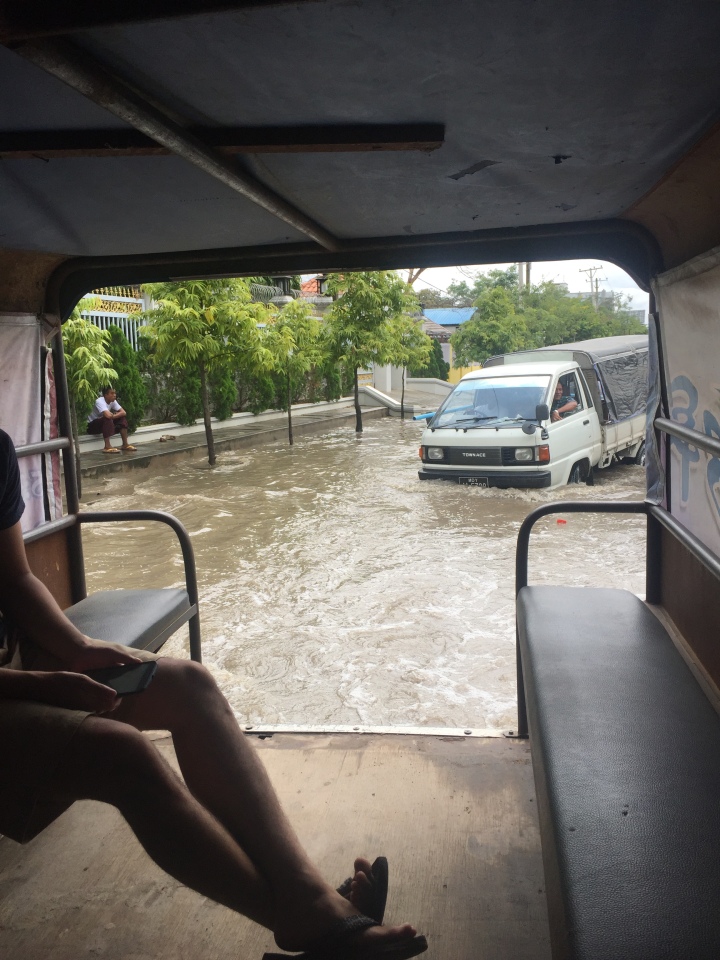 Mandalay was the location of the Burmese Royal Family before the British took over in the late 1800’s and had the family exiled to India.  So there is a decent amount of history behind what appears to be just a big city with crazy motorbikes everywhere.  We decided to stay one night before heading northeast to a smaller city.  We thought we could always return on our way back south if we wanted.  But just in case, we planned to see as much as we could while in the city. 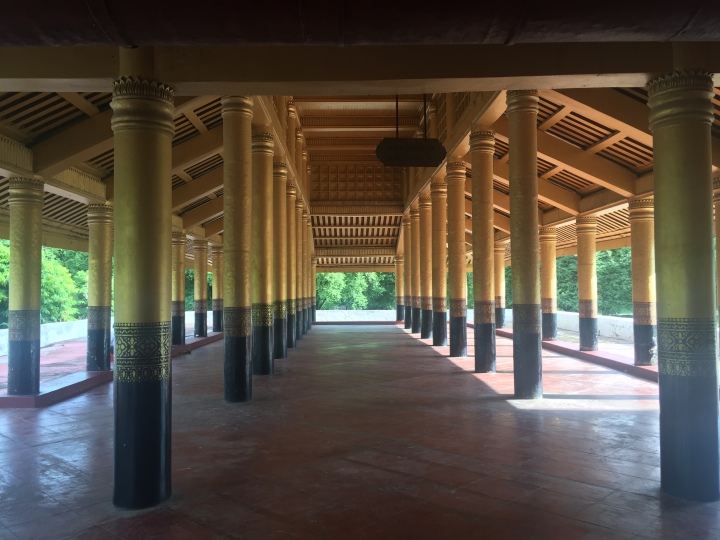 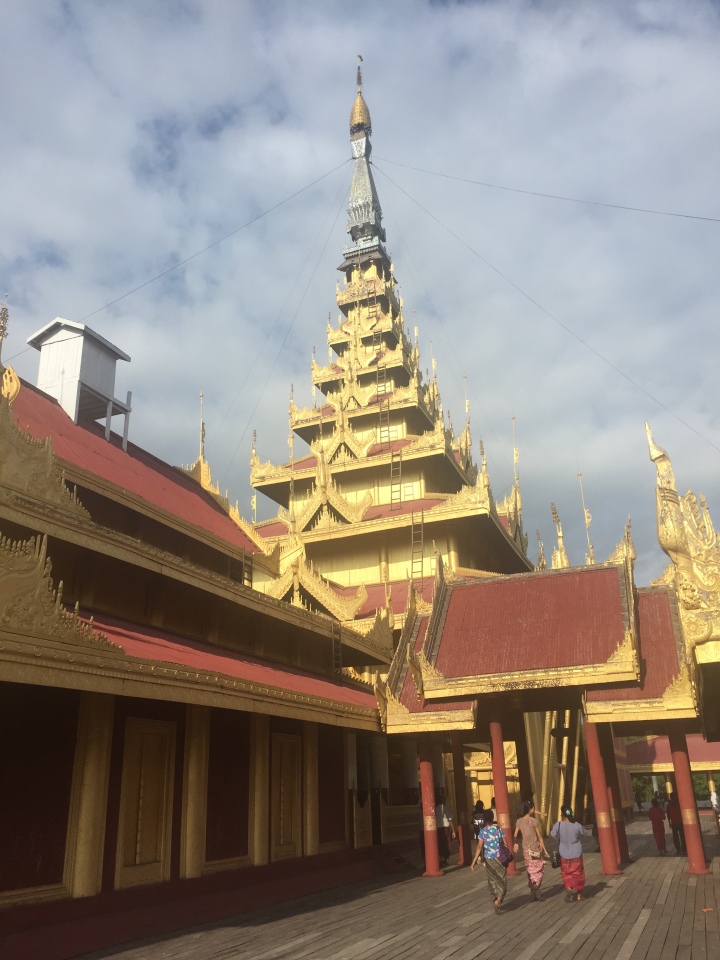 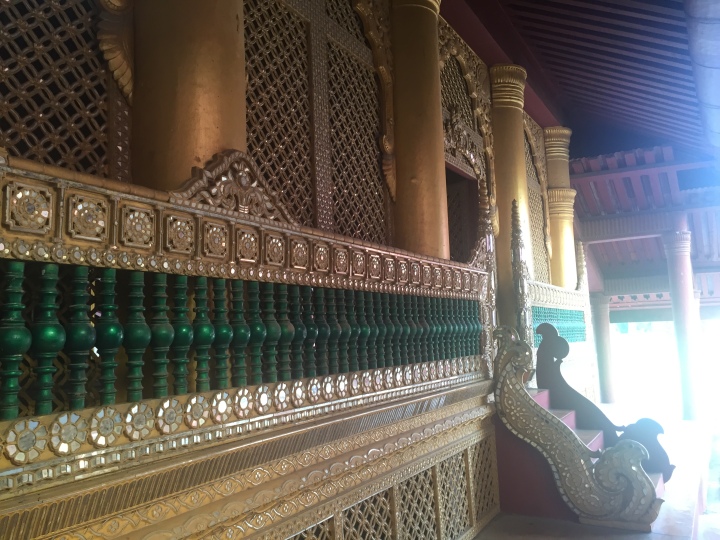 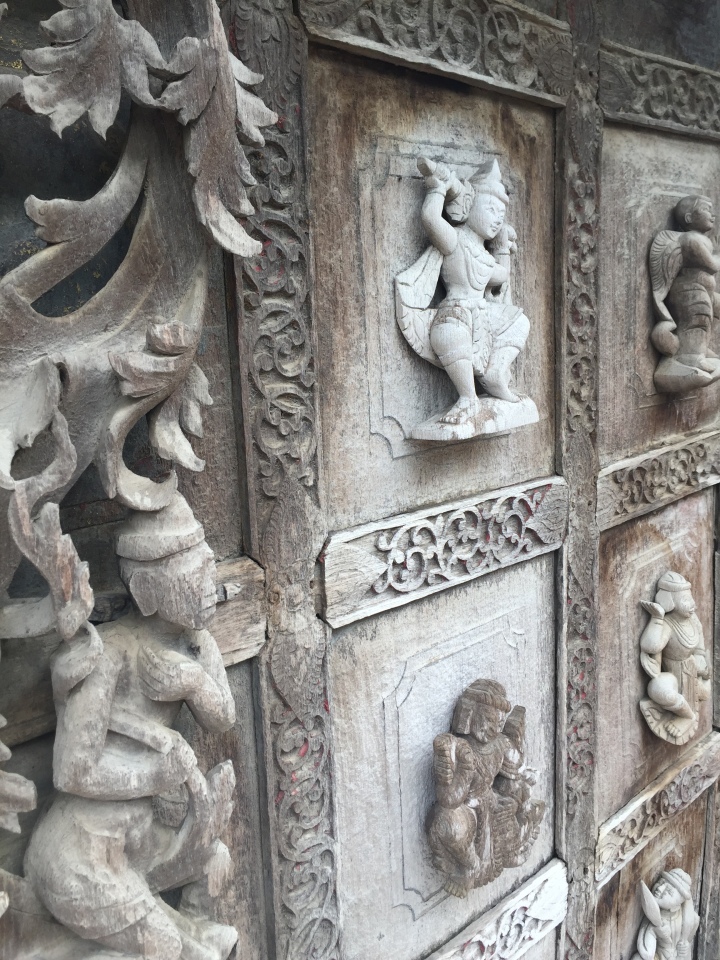 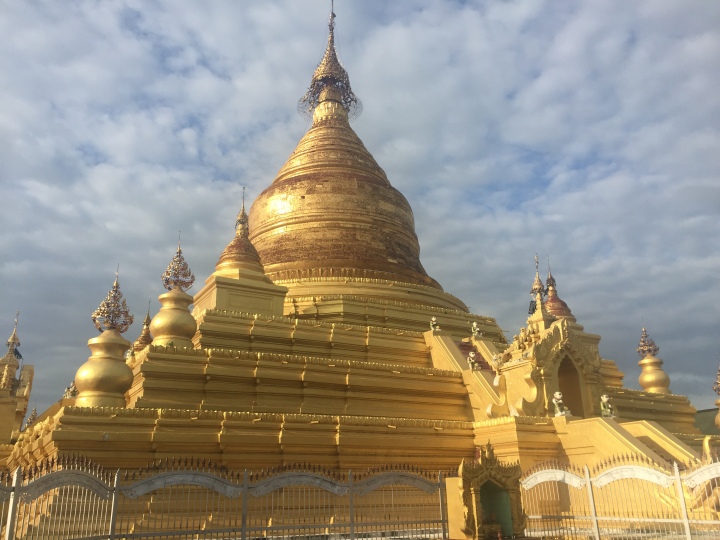 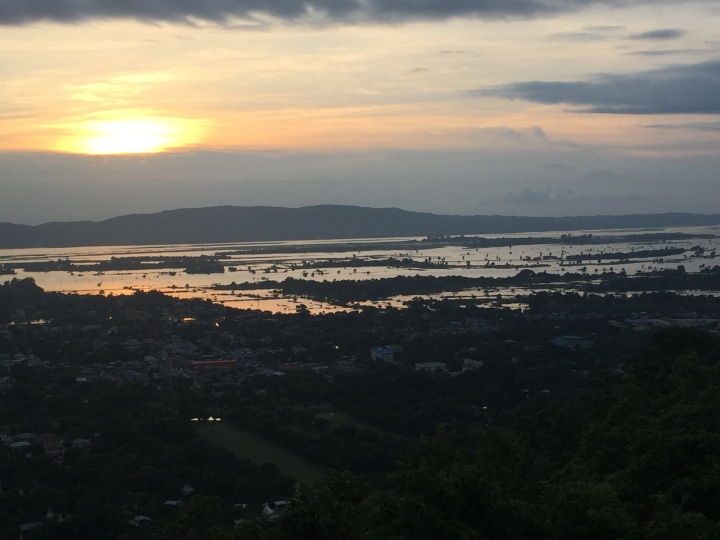 It was a busy day in Mandalay to say the least!

Well that’s all I’ve got for now!  I have one more Myanmar post left and then will dive into INDIA!! 😉