Hi friends!  For the final part on our time in Myanmar, I am going to tell you about Hsipaw (see-paw) and Inle (In-lay) Lake.  To reach Hsipaw, we decided to go with the train route again.  This route is a bit more popular for tourists, and we saw quite a few.  The route included going over a huge viaduct known as the Gokteik Viaduct which was built in the 1880s by the British colonists to bring the Northeastern Shan State under their control through trade.  This train ride had NO mice ( 😀 ), included several stops along the way (AKA restroom breaks for me), and the views were even better than the first train we took! 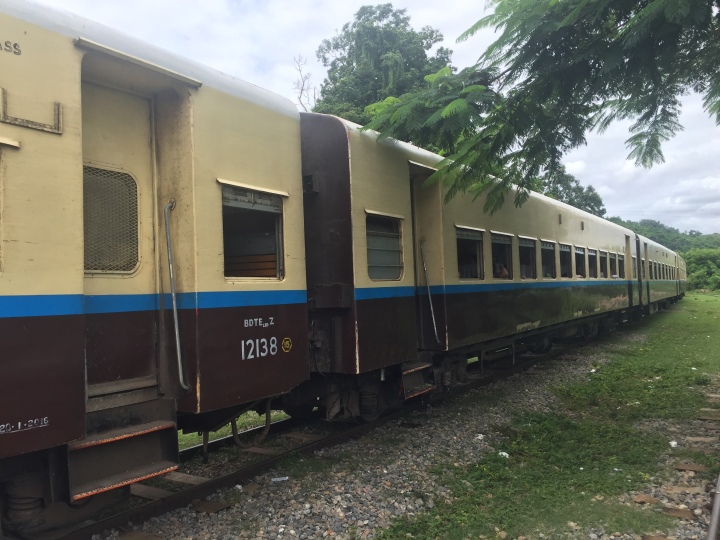 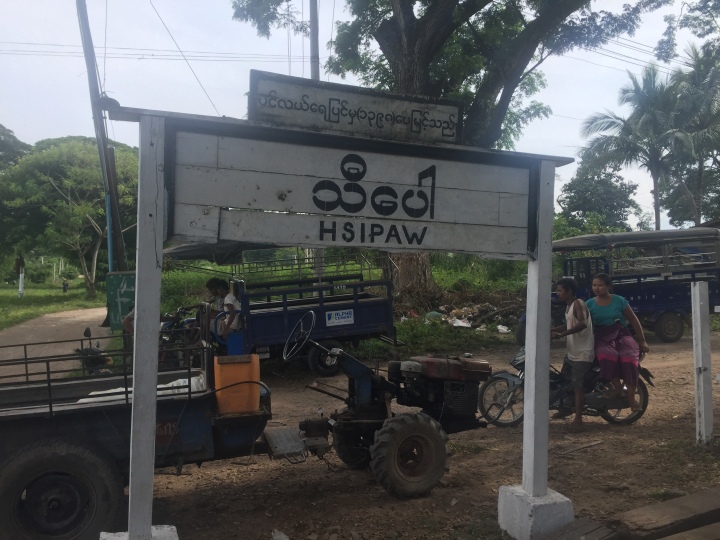 Similar to Hpa An in the south, Hsipaw is a small town with not too much going on in the city itself, though it is a little more lively than Hpa An.  The area is known for hiking and 2-3 day treks, which we decided to partake in.  We picked the 2-day trek and ended up having 8 people in our group along with 2 guides.  We walked through rice paddies, tea tree fields, corn fields, and stayed in a small village for the night.  The views along the trek were absolutely breathtaking.  The trek itself was not extremely difficult; it was a slow and steady climb for the most part, but it included more walking than any trek I had done before (approx. 16 miles on day 1 and 7.5 miles on day 2), so I felt it the following couple of days. 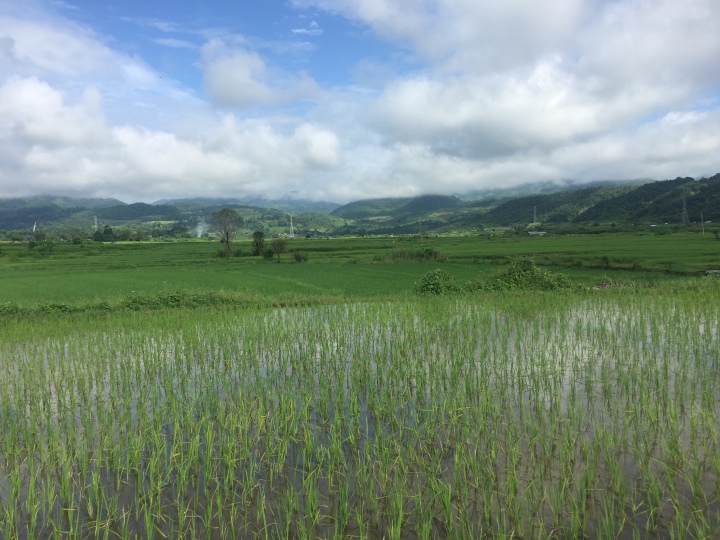 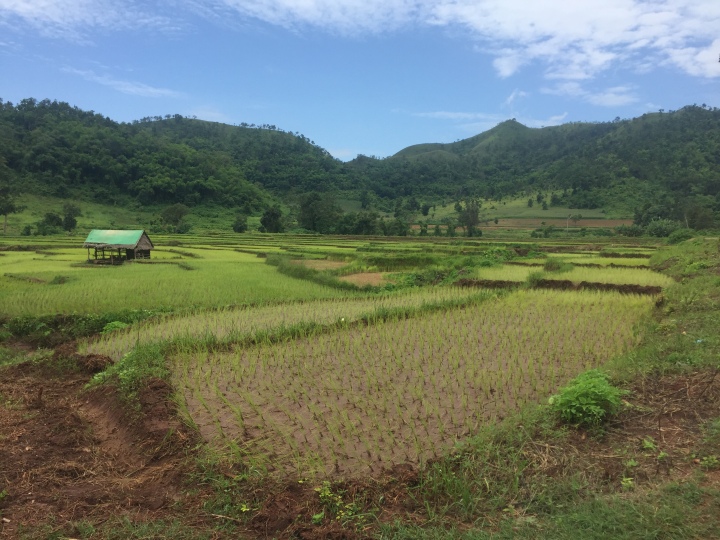 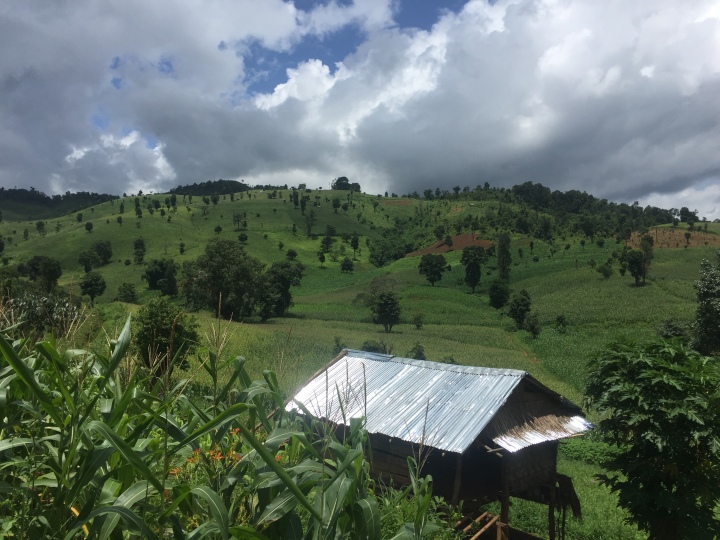 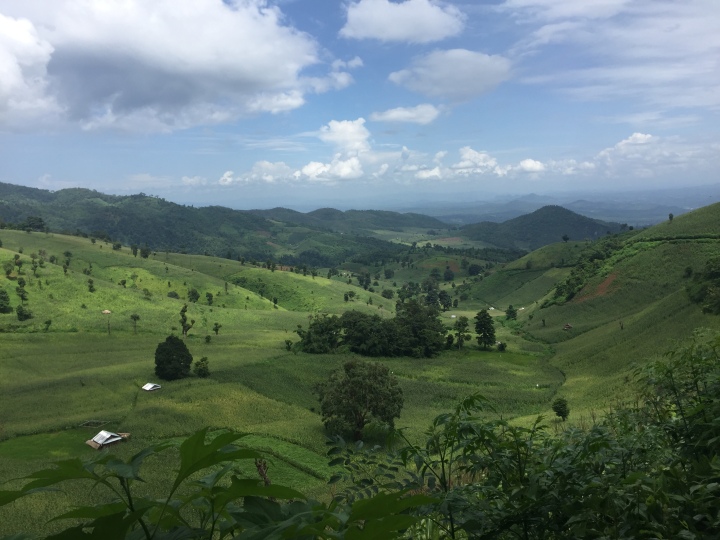 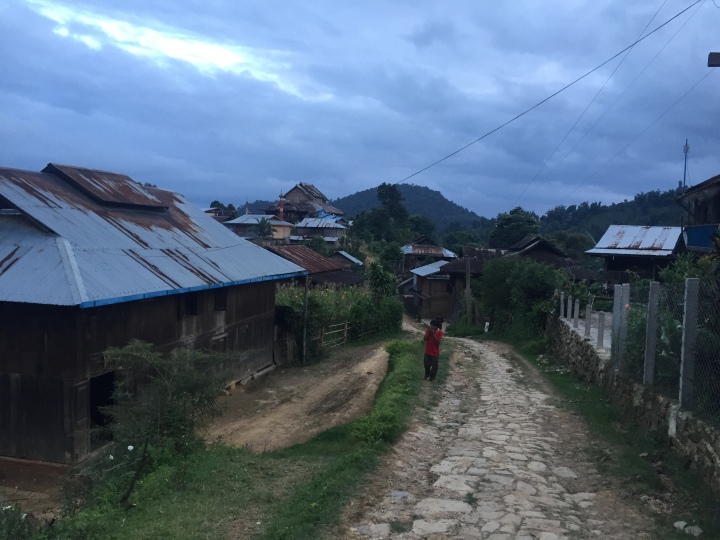 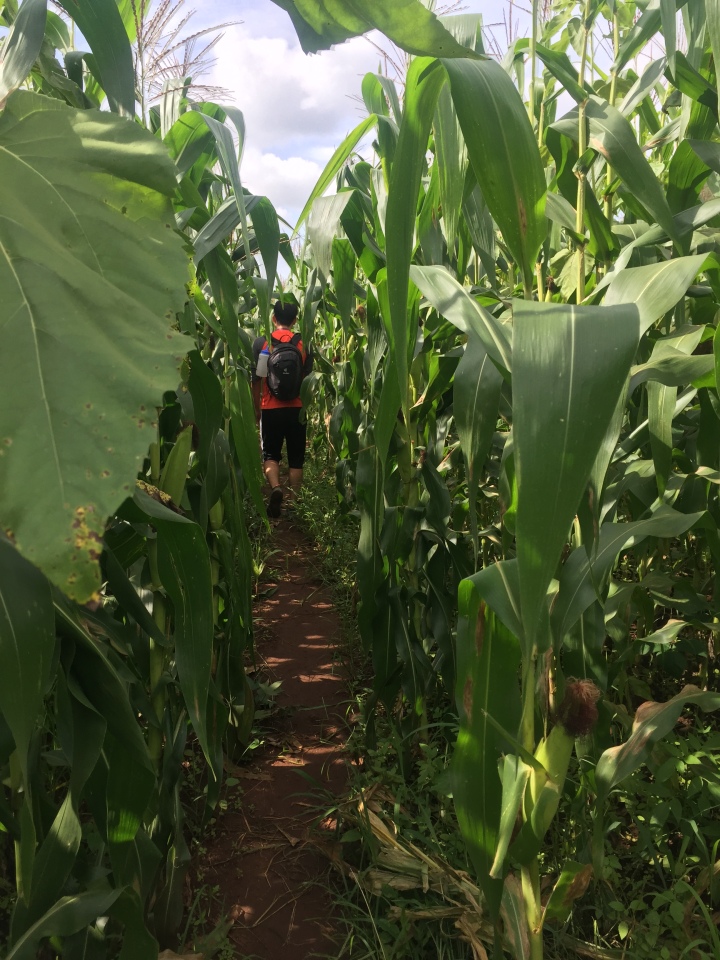 Hoch – We were supposed to eat late lunch at a village and continue further to another where we had planned to sleep. But after a discussion with the village elder, our guide informed us that the Shan army soldiers had gathered at the next village and that he feels uncomfortable taking us there. He assured the decision is up to the group, and that the soldiers are very unlikely to bother tourists as they don’t need any international press’ attention. The group, wisely in my opinion, decided to stay where we are and instead take an evening stroll (~5 miles) to an adjacent village. We did pass by some soldiers along the way, and let me tell you they have some big guns.

Our last stop was at a popular waterfall.  It happened to be a holiday and several people were there enjoying the cool water….in their clothes!  Again, another way they are conservative with their dress. 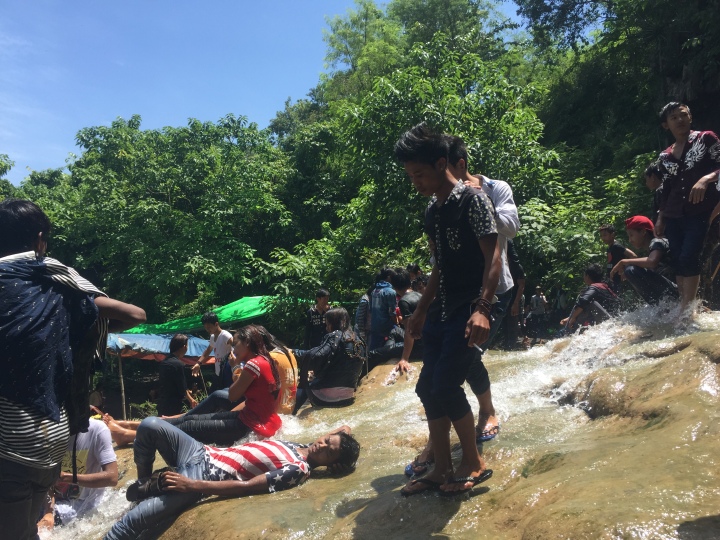 The rest of our time in Hsipaw was spent recovering from the trek (AKA drinking too many beers) and watching the summer Olympics.  We also were able to try a local dish of Shan noodle soup and enjoyed several fruit shakes from a popular restaurant in town.

After a long, uncomfortable overnight bus, we made it to Nyuang Shwe which is a small town just north of the lake.  We were able to check into our guest house early and get some sleep before going out for lunch and coming up with a game plan for our time there.  Well our luck in Hsipaw ran out and it started to rain pretty heavily.  So the first day there, we were pretty lazy, but a perk was that we had the best Wi-Fi in Myanmar and were able to download some more episodes of GOT. 😉

For dinner, we decided to check out an Indian restaurant to prepare us for India.  We started talking to the owner and right off the bat, I wanted to know where he learned his English.  He had some accent or something that I could not put my finger on.  He was half Burmese, half Nepalese, was born and grew up in Thailand, and loved Indian food.  He was 25 years old and spoke Burmese, Nepalese, Hindi, Thai, and English.  I finally asked where he learned it and he said he cannot read or write, but he learned from listening to music and practicing with tourists when he lived in Bangkok.  His favorite singer, or should I say rapper, is Eminem.  Then his accent made sense, he spoke like a rapper and had all this swagger that was definitely unexpected.  He even had a poster of Eminem in one corner of the restaurant next to a photo of Ganesh, the Hindu goddess with the elephant head.  He was a smart and interesting fellow to say the least.

The next day, we scheduled to go out on Inle Lake in one of the long-ass boats, which is long and narrow.  Our driver stopped at several places along the lake, including some holy sites, a small village, a shop, and my favorite part, the floating garden.  It is crazy to think that people live out there on the lake, in those houses on stilts.  We saw several women washing their laundry or bathing (in their longyis) on a bottom platform of their homes just above the water.  They use buckets to get water from the lake and then rinse off right into the lake.  Makes me wonder what they do with bathroom waste. 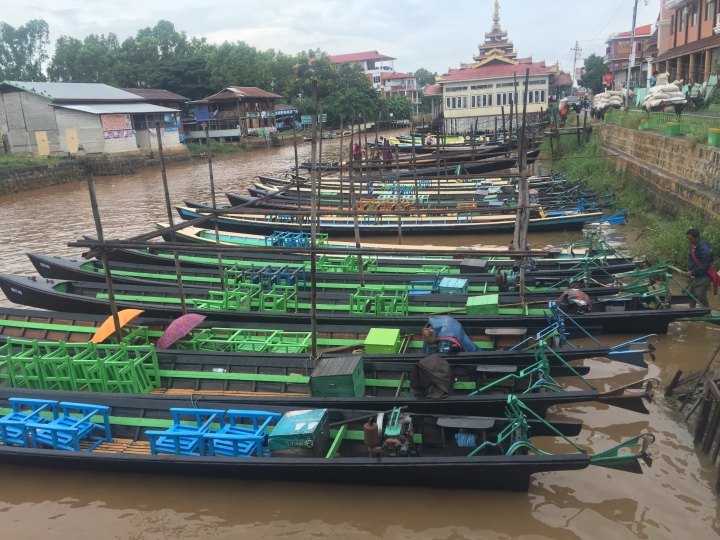 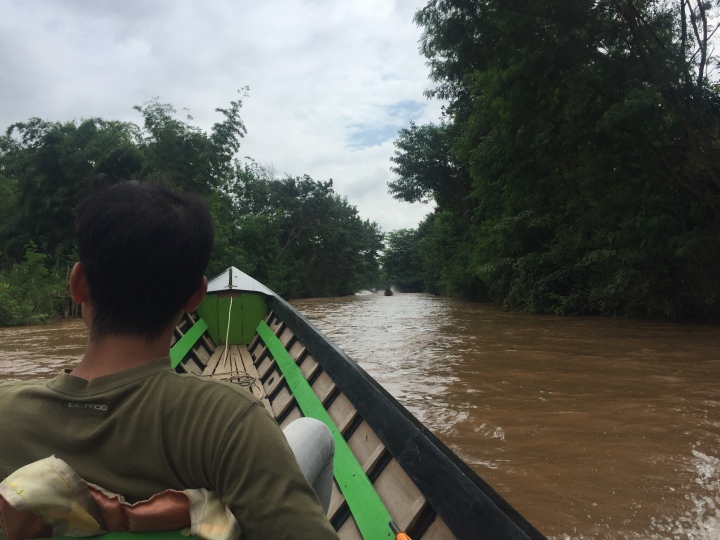 A few stops along the lake: 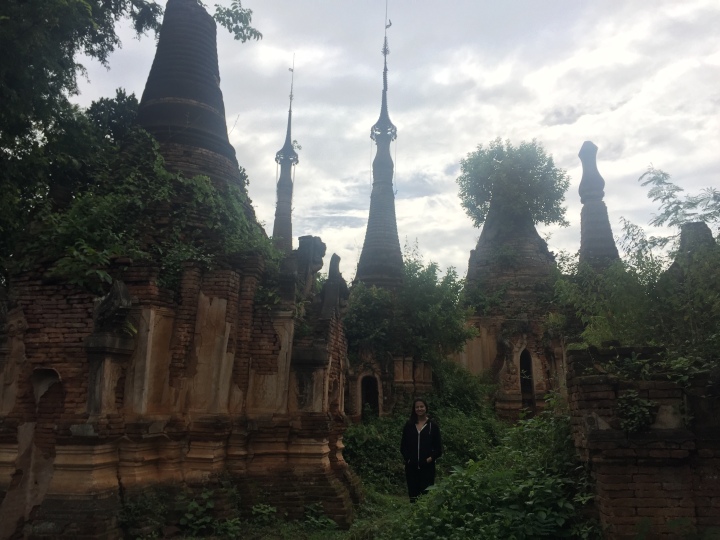 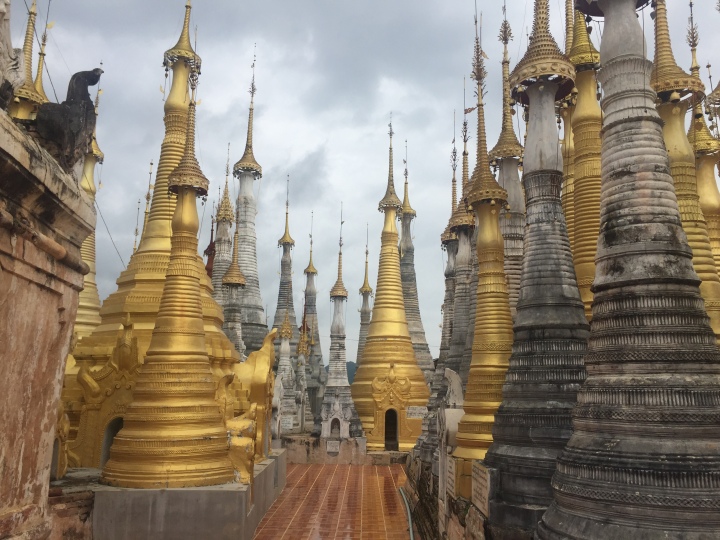 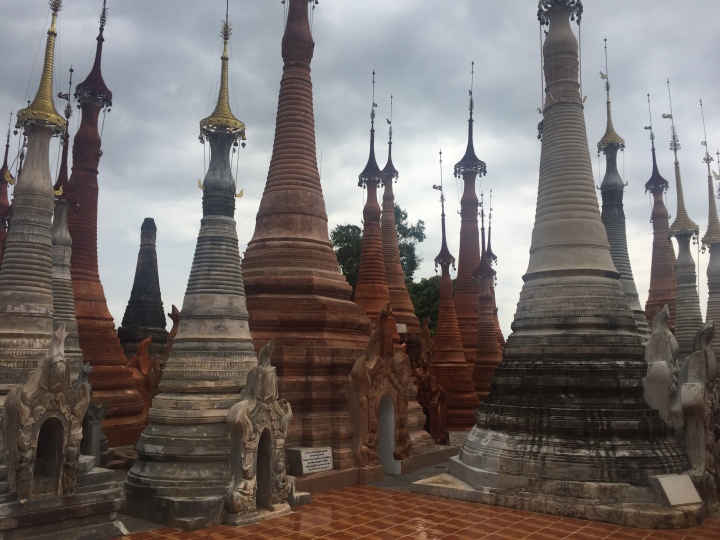 Women of Kayan are known for wearing neck rings, starting at the age of 5.  They increase the length of the coil as they grow older to give themselves the appearance of a long neck.  In reality, the weight of the rings compress their collar bone and rib cage.  The women associate wearing the rings with beauty and cultural identity. 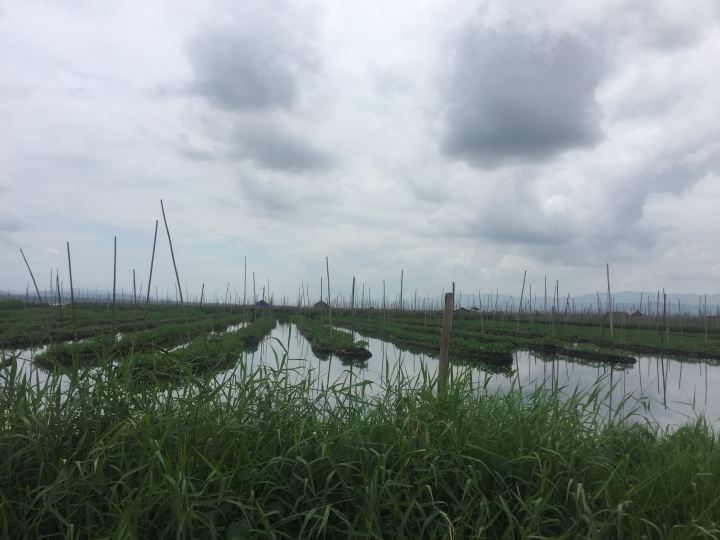 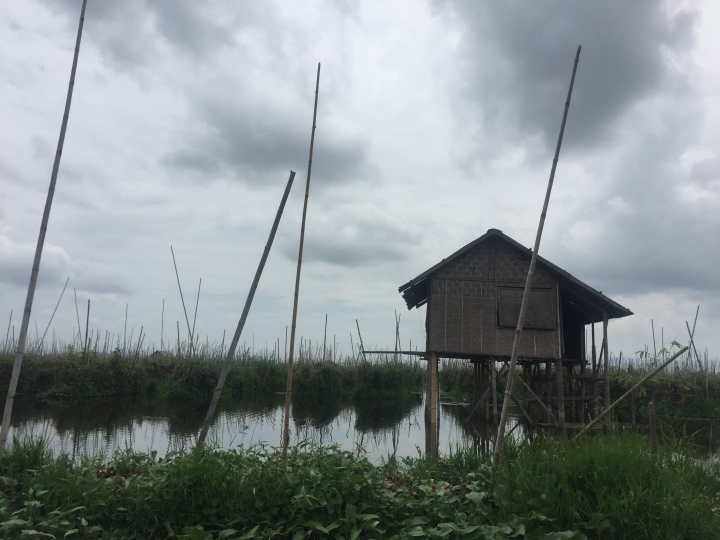 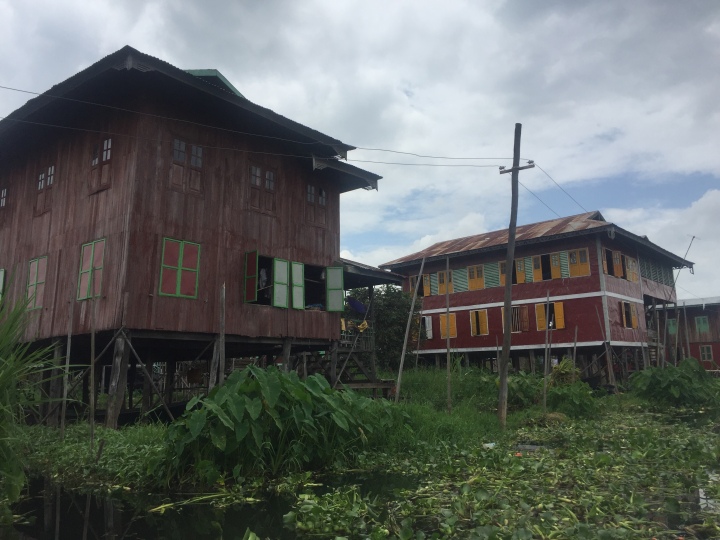 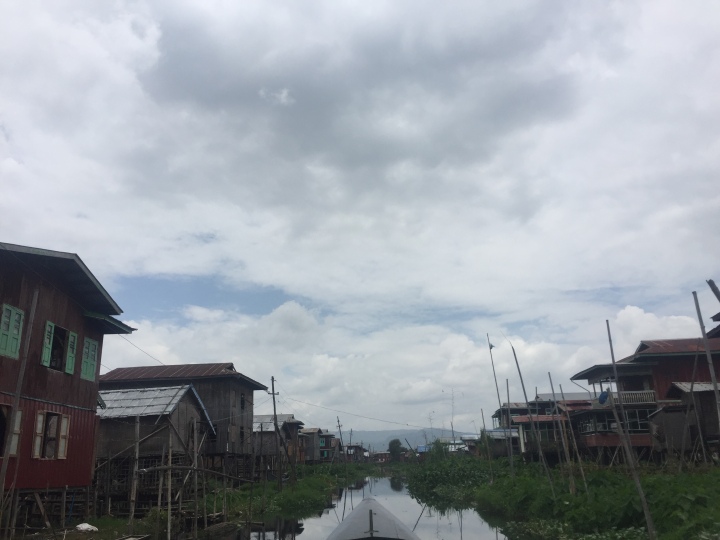 Our last full day in Nyuang Shwe, we decided to use the guest house bicycles to ride around town.  We ended up riding to see a small pagoda north of the town and a winery south of the town along with a couple of tea breaks in between. Hoch – that was some of the worst wine I ever spent money on. 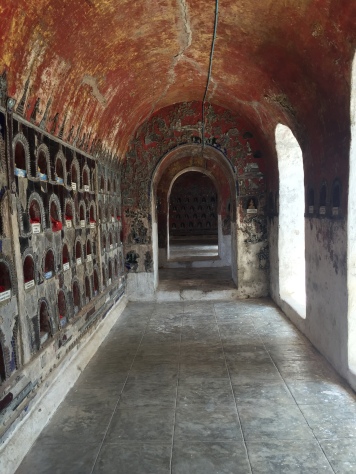 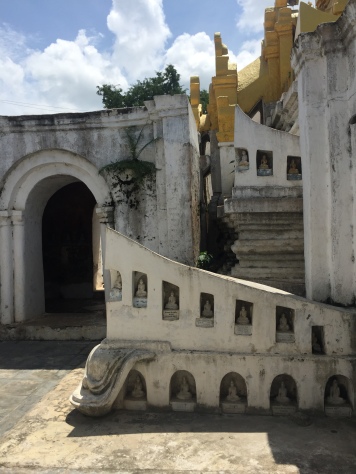 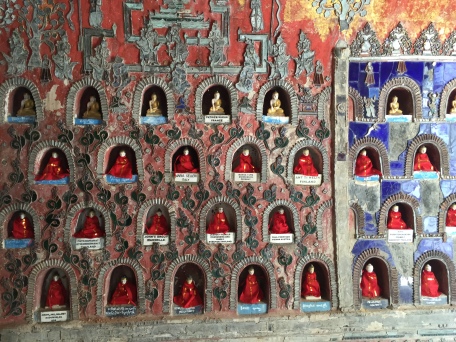 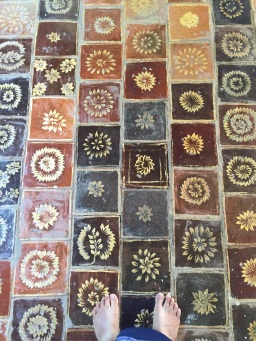 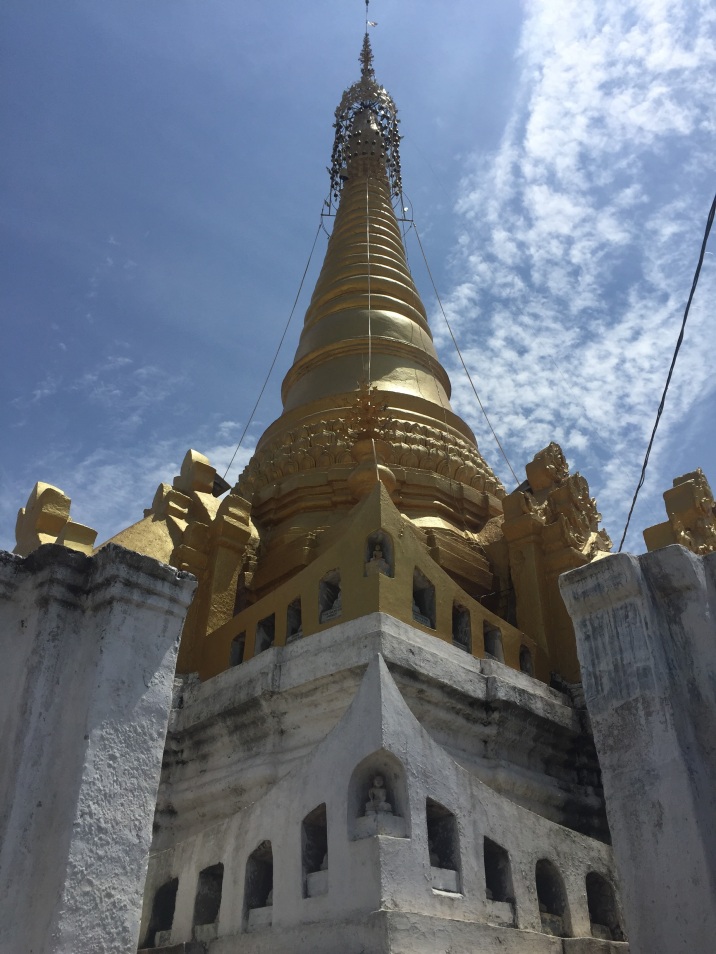 Views from the winery: 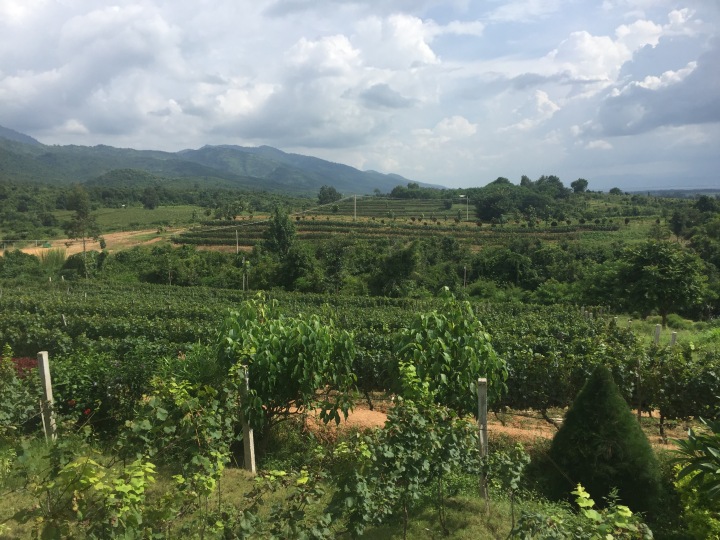 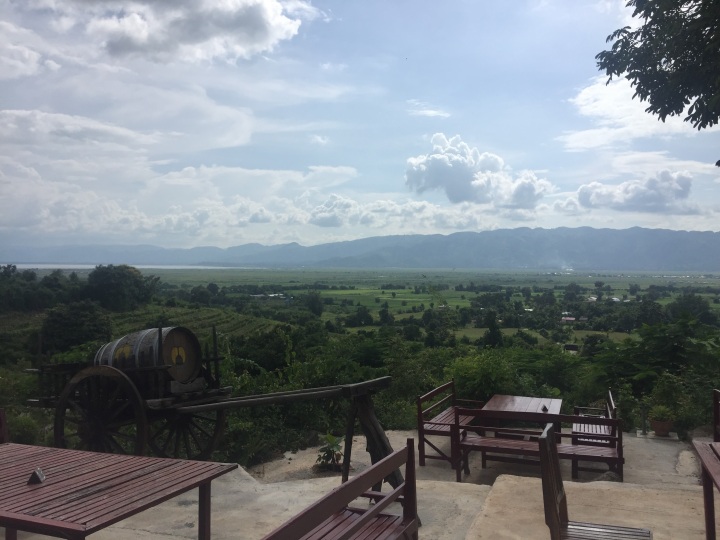 It was a nice relaxing day and a great way to end our time in Myanmar.  The following day was the beginning of a long and tiring journey to India which was far from relaxing (more to come in next post).

To sum up Myanmar, it was overall a very nice and relaxing country to visit between our whirlwind loop of southeast Asia and what is to come in India.  The people were warm and friendly and you really can get away there in the raw and untouched setting (also in part to the limited Wi-Fi) and not necessarily need a vacation from your vacation.  However, if you’re looking to party, this is not the place for you (at least not yet).

Here is a map of our route in Myanmar:

Also, for more pictures than what I’ve posted on the blog, check out this link:

AND check out my other Myanmar posts if you haven’t already! 🙂

That’s all I’ve got for now!

P.S.  As a part of holding myself accountable for getting ready for this Trek, I’ve decided I will post what I did to train for it in each post leading up to the trek as a way to get me moving.  We were in Inle Lake when we decided to officially sign up for the trek and I started my training on our last day there.

Good start so far!  Just need to keep it up!